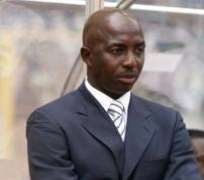 Former Super Eagles Coach, Augustine Eguavoen has said that Nigeria's hopes of qualifying for the 2012 African Cup of Nations can be punctured by uncommitted players.

Nigeria, with seven points, trail Guinea, who have ten points in group b and as the qualifying campaign enters the business end this weekend with the Guineans hosting Ethiopia in Conakry while the Eagles are on the road to Antananarivo to play Madagascar, who they are condemned to beat if they must keep up the chase with the Guineans, expected to win at home.

While the preparations of the Nigerians for the crunch game on Sunday, have been anything but decent, Coach Siasia, on whose shoulders rest the onerous task of taking the Eagles to the tournament to be co-hosted by Gabon and Equatorial Guinea, has been sounding his plans for the big game, his predecessor on the job, Eguavoen, has warned his former teammate to be more wary of his players than the opposition. It was under him that Guinea pipped Eagles 1-0. They have retained the lead.

Speaking to Sports Vanguard during the Gulder 5-A-side national final draws in Lagos during the Ramadam festival, Eguavoen said that Nigerian players are fond of letting down the nation at crucial times.

He said that for Siasia to succeed in Antananarivo, he must have a feasible alternative plan to guard against the frequent injury claims by some players, who use the pretext to rule themselves out of national duty.

'My real fear for the match against Madagascar is not our opponents but our players, who sometimes, use false pretext to stay away from some matches. From my own experience when I was in charge, our players could bring up spurious claims to stay away from games, despite the coach thinking that they would be available.

'The players will even give you their word that they would feature but they would end up disappointing you, with few days to the game.

'If Siasia must succeed, he must be wary of these players and put in place contingency plans that can help him achieve his aim. He must not build his team around some players, because such players can rock the boat, when you least expect such a thing', added Eguavoen.

He did not mention the players. He was sure that Siasia knew them. His worry was not only on those who fail to answer national calls but also their determination, which he questioned.