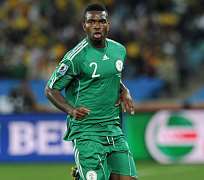 Joseph Yobo and Ike Uche may join the Super Eagles in Madagascar as both players try to sort out moves from their current clubs.

Samson Siasia has laid down a deadline of Tuesday for all players to arrive at the Super Eagles Transcorp Hilton Hotel lodgings, but defender Yobo and forward Uche have been given a little more time to sort out their futures before the transfer window snaps shut on Wednesday.

Yobo is negotiating a move away from Everton, while Uche could also be on his way out of Real Zaragoza.

'Its their future and that is very important so if they cannot finish on time, they will be excused to join us in Madagascar,' Siasia said.

On Tuesday morning, 12 of the 13 players in camp trained at the Abuja National Stadium. Emmanuel Emenike, was excused as he arrived just before the team departed to the stadium.

Striker Brown Ideye arrived at the hotel just as the squad got back from training.