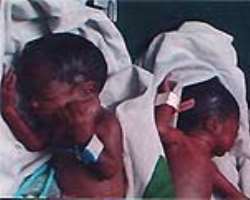 Sextuplets delivered by Mrs. Amuda Ajoke Bello at Olabisi Onabanjo University Teaching Hospital (OOUTH),SagamuThe mother was reported to have had two babies before having these set which had increased the number of her children to eight.

The father a battery charger was said to have fled when he received the news.

Informed sources said that the State Government immediately dispatched the commissioner for health, Dr. Mrs. Abiodun Oduwole to the hospital on being informed.

Two of the babies were said to have been moved to Lagos while the four others are said to be in incubators at the hospital.