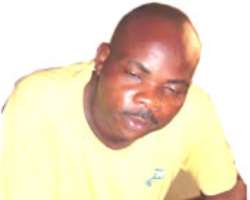 His style of music was unique, a one-man band with a tambourine who was able to capture the attention of many music lovers.

While his contemporaries were living at the people's mercy, Pa Benjamin Aderounmu decided to be different.

Many people must have encountered this blind music maestro on the ever busy Lagos roads, especially during traffic jams. Although he was visually impaired, he stood out as a music legend until he passed on, on Sunday January 25.

The Ondo state born blind musician who took to music early in life was able to release an album to his credit in 2002 with the support of former Lagos State Governor, Bola Ahmed Tinubu.

Today, he is no more but his works speaks volume of his commitment to his father land.One thing his son, Olayode would greatly miss about his father's departure is the saying of the elders, one of the qualities of this late legend.In a chat with Showtime, he said “anytime you speak with my father, you will always forget the fact that he was visually impaired.

He addressed people as if he was seeing them. I was surprised one day when he looked into my eyes and gave me a word of caution,” he said.

“I grew up to know my father as a musician in Lagos, he was a one-man band and a lot of people had been admiring him, not minding the fact that he was blind,” said OlayodeAsked how he felt to be called his son, he told ST in an emotional laden voice, “I cherish his talent a lot and I thank God for giving him the strength to do what his mates could not do. He is a free man with open heart.

He advises as if he sees what is happening around him. He used to appreciate people a lot and he was the hard working type,” he explained .Continuing, he said,“I was not happy to see him on the street but there was nothing I could do as at that time.

I was not in a good position and was not financially okay to take care of the situation. Each time they wanted to go out, I normally tell them to stay at home but none of them would listen to me because of the responsibility ahead of them.

I tried to put an end to this but it was impossible because I was unable to offer them something in return. I''m always pained to my bone marrow each time I remember this. I know they took to the streets as a result of hard time,” Olaoye also took ST to the good old days.

“When Eko Bank came in touch with him in 1998, they were able to provide a three bedroom apartment for us at Isale -Oro at Iju-Ishaga before Governor Bola came to his rescue and assisted him to wax his first album in year 2002,”Oyewole who recounted his experience as a student said, ““I became a graduate through self effort. T

he peanuts my father was getting from his road show was not enough to send me to school, You know he had to fend for himself as well as my mother.

As a result, I made up my mind not to bother them with my school fee but I really hank God for seeing me through.

I became a promoter after leaving school, the job I have been practicing as far back as year 2002.On the family's upkeep after his father's departure, he said, “Thank God for people like Governor Fashola who sent some amount of money when Baba was on his sick bed, the money has really gone far.

Also. He also took care of the hospital bill as well as the mortuary bill. With this, I think we are comfortable to an extent,”

“We hope to have Kokoro Foundation as time goes on because we want him to be remembered. I shall also use my experience as a promoter to keep this going,” he noted.When he was alive, Pa Aderounmu had tried to be unique not minding the situation on ground, take for instance, one important fact to prove this is that he was born on Sunday and died on Sunday, apart from this, his parents also died on