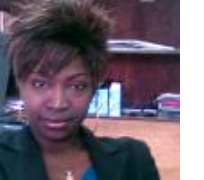 For those conversant with the weekly English Premier League and other soccer tournaments,Kiibati Bankole is a popular figure.

At just 25, she has garnered a lot of fans with the way she analyses football matches on television and radio.

Being a female does not even make the Lagos State University graduate feel intimidated among her male counterparts.

In a interview recently, she opens up like never before;

Recently, I broke up from a relationship. We were supposed to get married this year but we broke up by mutual consent.

I realized that we are not compatible.

Marriage is life. There are so many broken marriages around and it's not a joke.

Relationship is very sweet and nice. Marriage ceremony is very sweet. But the life afterwards is very difficult.

You see men in their early 30s getting separated; we need to be very careful. I just prayed over it. And after we did the introduction, something else came up. Because we were so much in love, we were overlooking it and I prayed and I came to the conclusion that I would have problems if I get married to him.

I equally realized he was distracting me from my career; I was slowing down a bit. It wasn't going to be a right decision to get married.
Though pained, we had to move on.

I still have a long way to go. Now I am single, I am not engaged.