My Husband’s Outpour Is To Make Me Lose Focus - Kefee 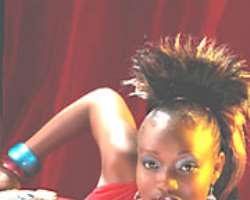 Irikefe Obareki a.k.a Kefee is one charming female songstress who has made a name for herself in the Nigerian music industry with her sonorous voice and her inspiring message in the lyrics of her songs. Though she is going through a messy divorce with her estranged husband, she has decided to be strong and moved on with her life. In this interview with SANDRA OKAFOR, she speaks about her pet project, 'Kefee Peace Foundation', her life as a celebrity and future prospects. Excerpts:

What is Kefee Peace Foundation all about?
Kefee Foundation was formed in 2007 and I actually started it because of the crisis in the Niger- Delta region at that time and since I'm from that region, it was only proper for me to do something to help in the little way I can. I know that we don't have the power to change things overnight but I believe that little by little, we can make a difference. It's about giving the little care we can; even when we don't have the money, we spend time with the less-privileged children and it makes sense in the end.

What inspired you to start off such a project?
I am from that region, so it was only normal for me to do something to reach out by preaching a message of peace basically at that time. After that, we did a peace concert; we had Sunny Nneji and Faze who performed and sang for free just seven days before the elections in Warri, Delta State. Last year, the foundation decided to distribute writing materials to children in the rural areas and right now, we are going to build and refurbish orphanage homes and also raise funds through a concert we are staging very soon called the 'Love Africa Concert.'

When you decided to go into music, what were your expectations and have you been able to achieve them?

My expectations were basically to reach out to people; people hear me sing and they say, 'you sing very well, you have a nice, lovely voice' and it was the only way I could really say whatever I wanted to say because I believe I have a good message/ good news to preach and pass onto the people. So, I had to use music to achieve that. So far, I think a lot of people know me and they listen to my work and they know what Kefee stands for and what Kefee represents.

What does Kefee represent?
Kefee represents anything positive, anything morally right, and anything that will make things better. My music says a lot about the kind of person I am.

How would you describe yourself?
I am a very loving, caring, patient person. I am someone a lot of people will want to have around them and most times they say I am humorous and very funny. I like smiling because when I smile, I get a smile in return. A smiling face makes people happy, it gives people hope and that is one of the major factors that keeps people going; the hope that things are definitely going to get better.

Why did you choose to become a gospel musician?
I'm a Christian though it is not all Christians that do gospel music. I also do the contemporary African music but mostly I do inspirational songs; the songs that inspire people, songs that talk about the society we live in. I am not only tied to the gospel genre of music, so people who are not Christians can listen to my songs and get inspired.

What was growing up like for you?
Growing up was fun, I had parents who really loved their children and taught us to love ourselves. We were instructed never to fight one another but even when we did, our parents' in the bid to punish us, made one of the fighting parties to sit on the other person's laps and look into each other's eyes until they both burst into laughter. I started singing when I was a kid in the children's department at church, primary and secondary schools. Most of my life, I have been on stage; I was this kind of a little popular person of some sort because wherever I am, people just know me.

What was your parents' reaction when you decided to go into music professionally?

Actually, my dad started encouraging me when I was much younger when I was in Primary Four, I was eight years old and it was good initially. When I got into the University where I did a diploma programme in Public Administration, my dad was saying “you have to focus and concentrate on your studies.” Then Kefee decided to do an album with a friend called Estee but my dad was not too happy with me. Later on, he calmed down but they have always been very supportive.

Would you say your albums have done well so far?
Oh yes, my albums have been successful; even this new one is really picking up very fast.

You do have a very pretty face and lithe stature, how do you handle your male admirers?

To me, my male admirers are just like my fans and I appreciate them.

Tell us about the most memorable day of your life so far?

There was a day I was on air on a live call-in programme on BEN TV in London and a man called and said his wife was in the delivery room in the hospital. He said it was the very first time his call was going through to a TV call-in programme and for that particular reason, he believed his wife would give birth to their baby safely and he would name the baby Kefee. I asked him if he knew the meaning of Kefee but he wasn't bothered at all, he said he really loved my work. I was tripped because he said all this on air and that gave me more shows at that time.

Who are your role models?
There's Yolanda Adams who is also a gospel artiste, there's Lauryn Hill, Bob Marley and I love listening to Tracy Chapman every morning.

A lot of reasons have been speculated as to how and why your marriage broke up; tell us in your own words what really happened?

I really don't want to go into that I just want to forge ahead and move on with my life sincerely.

Please, I really don't want to talk about it. Please!

Why don't you want to talk about it?
Whatever I said in court should remain in court. I know some soft-sell magazines have written outrageous stories about what I said or did not say in court but in the end will it change anything? It won't!

But your estranged husband accused you of infidelity and promiscuity. He alleged you were having an extra-marital affair with an Abuja-based man; how true is this allegation?

Oh yes, he has been saying a lot of things. He has actually put a face to all that has happened between us but to me, those are distractions. Why is he coming up now, why not last year? This issue has been happening for over a year and he is just coming up now with outlandish stories because Kefee has a new album in the market, now that Kefee is planning to do a concert. To me, all these negative stories are just to make me lose focus.

Are you telling us that he's saying all the stories to get back at you and your success?

All I can say is, he just contradicted himself a lot in the interviews he has granted concerning the break-up of our marriage. I really do not want to talk about what he has said or what he did not say.

Any regrets so far being a star and the issue of your broken marriage?

I wouldn't say I regret anything; whatever that has happened and is happening is what comes with the business – showbiz. Sometimes, the negative stories or reports about you are what make you stronger and more popular, especially when you walk into a place and everybody is saying something about you. It doesn't matter what they say whether good or bad, people will always say something about you. I am doing better now, I'm okay and I'm happy.

What were the challenges you faced to get to this point in your career?

When I wanted to do this last album, it wasn't so easy because before now, I used to have people helping out to talk to one producer or the other but now, I talk to the producer myself which I think is not bad. I don't think there were much challenges but initially, it wasn't easy. I thank God though because everything I had hoped for, so far, has come to pass.

What would you not leave your home without?
What I won't leave my home without is my handbag because I have a lot of stuffs in there, like my phones, my wallet and my handkerchief.

What are your future prospects?
For now, I just want to promote my current album, and then I'll travel to do some tours. I'll be going to the UK on the 25th of February. We are also doing the Love Africa Concert; we are getting artistes from all over Africa to Nigeria to perform. The concert is all about loving ourselves, and we are hoping to get Angelique Kidjo.

Are you in any relationship now?
Ah, no!
The way you just exclaimed, you sound as if being in a relationship at the moment is an abomination?

It's not an abomination but right now, I have my new album to promote and I have to go on tours. I really have a lot of things to do right now.

What if the man comes along or are you off men because of what happened to your marriage?

I'm not saying that, but if the right man comes along, why not? I just think it's too early to jump into a relationship now because I have to get used to myself, I have to know Kefee better and I think I'm doing that very well.