MANY OF MY MALE FRIENDS LOVE MY MUM-----DEOLA OLOYEDE, IRAPADA STAR 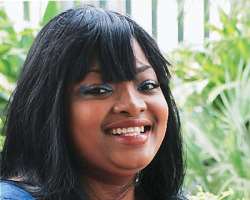 BEFORE now, Adeola Oloyede savoured life behind the camera. That guaranteed her anonymity. But now, things are no longer what they used to be. Daily, she is learning how best to deal with the enquiring stares she receives every now and then from admirers.

They certainly want to ascertain that it was her who played the lead female role in the multiple award-winning movie, Irapada, produced by Kunle Afolayan. Getting accustomed to the sometimes blank stares, perhaps, she has had to learn one or two tricks on how to beat her fans to it.

”At times I just want to duck my head, wear a face cap or put a veil over my head, but I guess this is what others in my profession go through so I am bracing up for the challenges,” Oloyede says.

Maybe if she had hung a signpost on her neck proclaiming her parentage, then she will be requested to answer more questions as it's very unlikely that she regain her freedom in a jiffy. Born into the family of Tunde and Bimbo Oloyede, both of them pioneers in the Nigerian film and television industry, she was also quick to carve her own niche, especially after bagging a degree in Creative Arts from the University of Lagos and a professional diploma in Human Resources from the Thames Valley University in the UK.

For someone who went into the university to study computer science, how did she find herself graduating from the Department of Creative Arts?

”I took the lazy way out,” is her shuddering response. Pausing long enough to allow you recover from the explosion, she expresses herself in clear diction that instantly brings to mind her mother's exploits on tube at the NTA and lately Channels as a newscaster.

”I went into the university to read Computer Science, but then I realised that it was not what I wanted to do,” says Oloyede. ”Then, my uncle was the HOD of the Creative Arts Department so I thought it would be easy and I erroneously envisaged it was all about clapping and dancing.

”My dad did not take it lightly until I asked him if he would have me stay back in school longer than it was necessary. I think that was when he came to terms with my choice.”

Having lived and worked in the UK for a while as senior human resource manager and then line manager in a few recruitment agencies, there was an overbearing urge to return home. The longer she stayed in the UK, the more it became glaring that she was not cut out for the stereotyped life that that society forced on her.

Holding forth as number two in the hierarchy of her parents' offspring, she heeded her sixth sense and headed back for Nigeria, where she rightly belonged as unfolding events later confirmed.

”I was scouting for a job when I got back from London. I went to see Uncle Remi Ogunpitan, who informed me Big Brother Nigeria was coming up,” she recalls.

Oloyede was promptly signed on to the technical crew and then a few days' later, providence played out its role.

”I joined BBN as a logger, but by the third or fourth day, I became its content director,” Oloyede recollects. ”The erstwhile content director resigned and I was told to wear those shoes. I was about one of the youngest in the control room, but it did not stop me from getting the job done. I guess they just believed in my potential.”

After BBN ran its full course, Oloyede took turn on the set of the Haier Thermocool sponsored Next Movie Star as its content director and Nokia First Chance, where she was the associate producer.

Growing up, she says, no one pre-empted she would one day take to either acting or production. ”I think I am one of my siblings that showed the least interest in either of the departments, but once I got into creative arts, I fell in love with the arts. I don't think there is any other thing I could have done. Even though I did HR, it was because people just think production is a lazy man's business, so I thought let me just do something else also people oriented so I went to a counsellor and by the time I was done with her, we agreed that I am a very restless person and I like to do hands on jobs and be on the field,” she adds.

Experimenting with movies, Oloyede says, did not begin with Irapada. ”I did something small like a waka pass (extras) in Keeping Faith with Ego Boyo,” she says. ”Irapada was my first major movie.”

Clinching a role, lead role for that matter, was not planned for, she explains. ”I was cajoled into doing my first movie and then the second,” says Oloyede. ”I was working with Kunle on the production angle. I think it began the day I was casting Maureen of BBN for a role and I had to read some lines.

”Kunle just looked at me and said, 'How can I be looking for Moji when I have her right here?' and I was like, you know my Yoruba is terrible. It's amusing that eight years ago, my sister was actually meant to partake in Saworoide and in the process of trying to coach her in the language, she fell sick and Kunle was part of it. He assured me that I will speak a lot of English coupled with Yoruba, which was just okay.”

Clinching a lead role in the early part of one's acting career is a concession not many actors can boast of but Oloyede insists it has helped screw her neck to her shoulders.

”It was interesting and I kept on begging Kunle not to put me in the limelight,” she says. ”We kept on having fights about that, which is one of the reasons I never granted any interviews or spoke to anybody except at news conferences, where I had to answer one or two questions because I just didn't want anyone doing anything malicious on me.”

Relating her experiences on the set of Irapada, she gets very animated as she speaks. ”Working with a team of people I already knew was like working with family,” she recalls. ”I had several interesting moments. Imagine me having to sleep with my fake belly to get used to my pregnant character?”

All this put together will not make her ditch production for acting. ”I would choose production ahead of acting over and over again and the reasons are not many,” Oloyede affirms. ”I just don't love being in the limelight.”

Growing up with parents such as hers is pretty normal, she enthuses. ”I am used to people speaking about my mum; I just wonder because yeah, she is my mum. I have a lot of my male friends who love her and I tell her. She was and is still very cool. She is like my best friend. I am the only child around, so we are always talking; we call each other all the time,” the younger Oloyede says.

”We get to exchange ideas. I actually appreciate the kind of relationship we have. She has helped me keep my head straight. I've never heard any bad press about my mum or dad in my life and because of the line I am in, it has kept me under check. I don't want to be the one to bring bad press to the family.”

With her in the limelight, that brings to three members of the same family under public scrutiny.

She says, ”My dad thought I could not handle the attention. I did a Lux advert when I was in the university and I was everywhere, bill boards, magazines and I went about lying I was not the one. My father thought I was crazy. I think I have done quite well amongst my peers and he is proud of me.”

Taking a random guess, Showbiz suggested that her parents, who are renowned production specialists, must have assessed her performance. She replies, ”My dad does not talk much. My mum has actually not seen the movie. All he said was the movie was a little bit slow. Things should have been a bit faster and I was like that is what the director wanted. He does not just pat me on the back all the time. You know I was a very naughty child growing up. I always wanted to do the opposite of what people wanted.”

Airing her views on Nollywood, she has nothing, but encouraging words for the industry at the brink of collapse.

”I think that there is a slowdown, but the slowdown is happening so that there will be a bang,” she says. ”I've spoken with a few Hollywood people who want to come and do things so I see Nollywood blowing up in no time.”

There is no remote possibility that you would find her in pubs or clubs at odd hours. ”I love my home,” she says. ”I just love to relax and there is no better place to achieve that than the confines of my home.”

”Note the word home not house,” she emphasises, as if drawing your attention to the dissimilarity between the two terms.