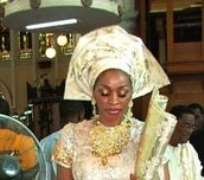 The wife of billionaire industrialist Chief Rasaq Okoya,the owner of Eleganza Group of Companies, Shade Okoya is the youngest wife of the Chief and she's the one who now controls the companies of her husband after she forced her school mother, to who she later became stepmother, out of the establishment.

The story of their fight is by now common knowledge but what happened recently that forced the beautiful wife of the Eleganza owner to lose her cool and head to court over what many termed a ridiculous amount of N10million,is the fact that sometime ago, on one of her trips from Germany aboard a Lufthansa Airline, her goods went missing and she accused the airline management of not showing enough interest in her getting her baggage back.

This infuriated her to the extent that she approached a court, claiming damages of N10million from the airline for her missing baggage which she said contains very important documents, materials and costly personal effects worth several millions, and that the missing baggage caused her to shop for new clothes, shoe,cosmetics and other personal effects, leading to great motional trauma and inconveniences.

But the airline, in their response to her accusation, countered that she failed to declare the content and value of the baggage before handing it over and that if she had declare this, they would have ask her to insure it.

They said they could not have been submitted to customs and immigration before passing it to them.