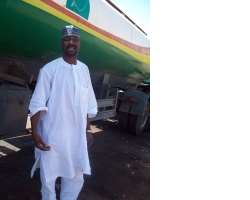 Iyan-Tama -- persecuted for speaking out on social issues.
Listen to article

Dressed immaculately in a crisp dogon riga, the only physical sign that he was in prison was his rubber slippers. He joked with the friendly prison guards, greeted each visitor by name, and narrated how in December 2008, a mobile court justice had sentenced him to three months in prison and a fine equivalent to $2,500 for allegedly failing to register his company, Iyan-Tama Multi Media, with the Kano State Censorship Board.

He was also sentenced to a further year in prison, with option of fine, for supposedly selling his film Tsintsiya without having it censored by state authorities.

"The judge held up Tsintsiya and asked if this was my film." Iyan-Tama told us. "I said, 'Yes, but it's not for sale in Kano.' The judge said I should answer, 'yes or no, yes or no.'"

The melodramatic behaviour of Justice Mukhtar Ahmed, who insisted on passing judgment on the politically-active filmmaker even after a subpoenaed police witness did not show up in court, was the climax of a case that has unfolded like a plot out of a "Kannywood" film.

Iyan-Tama was first arrested and charged on May 8, 2008 in a mobile court, an ad hoc court established by the chief judge of Kano State for the quick dispensation of justice on censorship-related offences. Iyan-Tama had returned to Kano from the Zuma Film Festival in Nigeria's capital city Abuja that same day, where his film Tsintsiya, a Nigerian "remake" of Westside Story sponsored by the U.S. embassy, had won a prize for "Best Film on Social Issues."

The Director General of the Censorship Board told IPS that film industry stakeholders are expected to keep a certificate of registration with the censorship board in their possession at all times. If they produce their certificate when requested by the mobile court, they go free; if not, they are to be charged.

According to his brother, Dr. Ahmad Sarari, Iyan-Tama had advertised on radio and in major newspapers that his film was not for sale in Kano. However, after a police raid on another filmmaker's shop, several copies of the film belonging to the film's star, Baballe Hayatu, were confiscated from a desk drawer and used as evidence against Iyan-Tama.

Northern Nigeria's film industry, which employs thousands and until 2007 was worth 35 percent of the thriving "Nollywood" industry, is accused by its critics of "adulterating" Hausa culture. However filmmakers, musicians, and novelists often claim that they are scapegoated for exposing corruption.

According to Sani Mu'azu, president of Motion Pictures Practitioner's Association of Nigeria (MOPPAN), Iyan-Tama's arrest is political: "Iyan-Tama is a victim of his political activities. He contested along with [Kano State Governor] Shekarau for the governorship of Kano State, and he vocal[ly] challenged the transparency level of the governor. Kano Censor's Board is just being used to get through a script written from the Government House."

Significantly, in his banned film Tsintsiya, Iyan-Tama plays the governor of Kano State, presiding over an investigation into the causes of sectarian violence.

Abubakar Rabo Abdulkarim, director general of the Kano State Censors board, a local entity unrelated to Nigeria's National Film and Video Censor's Board, has denied allegations that Iyan Tama's detention is political. In a Jan. 27 interview, he told IPS that Iyan-Tama should have communicated officially with the board about his intentions not to sell in Kano State.

"Whether smuggled, whether brought officially, now that is his own problem. The law says any [film] that is intended to be marketed in Kano must be censored by this board. If it is an exemption, application should be made to that effect. None of this has been formalized with this board. Therefore, it deserves to be punished."

Sarari, who is also Vice President of MOPPAN, responded to Rabo's statements saying the Board had not been able to prove in court that Iyan-Tama had released the film in Kano State: "There was no single marketer who went to the court and said, 'Yes, Iyan-Tama sold the film to me.' None."

Iyan-Tama's punishment is the most severe in a series of arrests and hasty trials at the mobile court attached to the censorship board and presided over by Justice Mukhtar Ahmed. After a sex scandal involving a Hausa actress in August 2007, stricter interpretations of the existing censorship law began to be enforced, including requirements that anyone involved in the film industry, from actor to editor to video seller register individually with the censorship board. Musicians and writers have also been asked to register.

Sarari estimates that following the crackdown by the censor's board, Kano State has lost billions of naira in revenue.

In November 2008, following a mass protest by film actresses who publicly changed political affiliation from the All-Nigerian People's Party, to which the Kano State governor belongs, to the People's Democratic Party, which is in power at the national level and in a majority of Nigeria's thirty-six states, police raided and closed studios, arresting over a dozen studio managers and other studio workers.

In addition to the higher profile arrests of artistes, there have also been hundreds of arrests and hasty trials of people employed in entertainment-related industries, including "download and transfer" business workers who have been convicted for using cell phones to transfer Hausa music, audio, and video, "traditional medicine" vendors for "obscene" illustrations of their cures, as well as workers in video game and football viewing centres. Several detainees I interviewed described being arrested by plain clothes policemen who did not present identification.

My second visit to Iyan-Tama in prison was on Jan. 22, following the last-minute postponement of his second appeal by the politically appointed chief justice. Although he still joked with the guards, Iyan-Tama was more sober this time.

It was as if he had sensed the news none of us had yet heard. Earlier that morning at 2:15 am, his wife and children had been threatened by unknown thugs who invaded their home and claimed they had "been sent to terrorize them."

"I just want to get out and continue with my life," Iyan-Tama told us. As of Feb. 13, he was still in prison waiting on his appeal.