I don,t care about Hollywood, I want to be the king of Nollywood –Emeka Ossai 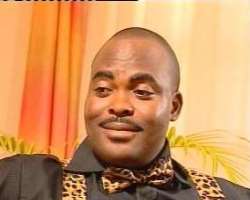 What are you doing currently? I have just produced a soap opera in 26 episodes and I intend to start running it from March on TV... and cable networks.

Can you let us into your background?
My name is Emeka Ossai. I'm a graduate of Food Technology from Yaba College of Technology and University of Agriculture, Abeokuta. I got into entertainment - let's say by accident.

While I was in school at Yaba Tech, an offer from Lowe Lintas Advertising came. They were looking for a model for a campaign and I was picked. I also got into fashion modeling. I rose to become the number one African model from where I was invited to the home video industry - Nollywood as it is popularly known. I got married for a while and I lost my wife after about 5 years. I re-married about a year ago.

What is your perception of Nollywood?
Nollywood has grown in terms of technical qualities, but not in terms of commercial quality and business exploits. I believe that the watching public have been expecting more from us than what we have been able to do and that's very sad. I think we are at this level because government has not adequately participated in what we are doing. This is an industry that started with the help of some individuals who decided to invest their money. It has got to the point where the government is supposed consolidate our operations, especially in the area of checking piracy.

Is Nollywood still worth it?
Well, it's still worth it. We are still operating, getting our livelihood from it, still employing as much people as possible. So, it's still worth it. But we are saying we have got to the level where government is supposed to come in to take it to the next level, do you understand? Progressive people try to always improve on their situations at every point in time. No matter how good you say something is, it could still be better. So, we are still doing what we feel is good, but we ought to be doing much better than we are currently doing.

Have you ever regretted being an actor?
No, never. I have never seen myself doing something else apart from what I am doing today.

Have you ever been neglected by your colleagues in the industry?

No.
I happen to be one of those who started from the beginning and I am happy with my achievement at every point in time. I also have been able to carry myself in a way that my colleagues entirely respect me. They respect me very well at all times, so there is no room for any intimidation.

Tell us some of your big jobs.
Well, I will say that all my jobs are big. I have some memorable ones, though. For example, my very first job was memorable too. That was Circle of Doom. Circle of Doom as a film was released on the same day with Living in Bondage part 2. It was produced by Okechukwu Ogbundokpo. Living in Bondage was my major break; that is the film that really put me in the limelight. I will also want to remember Mission to Serve. It was on that production that I met my first wife - that's my late wife. I remember Amina. That was a very big film. I remember Tongues of Holds that was my first production as a producer in 1996. I remember Life and Death - that's one of my films too. It was quite good. I remember Executive Mess which was a film made by Penn Collins which shows the dirty dealings of some of Nigerian's Senators. I remember Flash Back. There are several films. It is very difficult for me not to have a reason to get attached to all the films I have done. And, for your information, I 'm not one of those artists that do N500,000 or N100,000 films. No. Even though I may not easily count the number of films I have done, I am very selective in the number of films that I do. All the films have a reason to be memorable.

Tell us some artists and directors you like working with.

Some of your colleagues in the industry are trying to get into Hollywood. What are your own plans?

Well, I will not want to join issues with the claims of anyone being in Hollywood. I can go to America and shoot something somewhere in America and come back and tell you that I have been to Hollywood. But I admire the courage of whoever it is that is making his way to Hollywood. I have always believed in getting the best out of the way you are and let Hollywood come to you. I cannot go to Hollywood, Hollywood will come to me. First of all, let me be the best I can be in Nigeria. Let me make the money I want to make in Nigeria before going to Hollywood. There are a lot of black Americans who are not yet Hollywood; who are trying to make it from different states to Hollywood and they have not succeeded. I will not go to any back quarter street to America and shoot a film and I will tell you that I have been to Hollywood. That's not the issue. I want to be the king of Nigeria. I don't care about Hollywood. If tomorrow Hollywood recognizes my effort in Nigeria, I will be glad to feature in it.