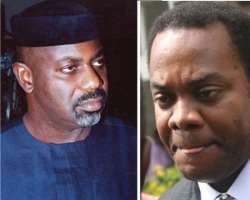 A famed but yet vague power rotation pact among three friends is at the point of unraveling as associates of former Governor Donald Duke plot against his successor, Liyel Imoke

By Emmanuel Aziken  & Johnbosco Agbakwuru
It has for years been the subject of political gist in Calabar, the Cross River capital. It is the alleged agreement of Mr. Donald Duke, Senator Liyel Imoke and Gershom Bassey to among them, rule the state for twenty four years.

However, midpoint into the so far successful scheme, the plot seems to be unraveling with associates of the first beneficiary seemingly aiming to scupper the arrangement.

After eight years of complete dominance by Duke, Imoke was to have his own eight years as he is now having and then followed by Bassey, the third leg of the triumvirate.

Duke may not have openly come out to frustrate Governor Imoke but the imprint of his associates are all over the place in what is alleged to be a growing conspiracy to stop Senator Imoke in the rescheduled gubernatorial election scheduled for next April.

Allegedly at the head of the plot is the Nigeria ambassador to the West African country of Mali, Chief Sonni Abang who was at one point the chairman of the PDP during the Duke era.

Though several members of the powerful caucus that ruled Cross River during the Duke era have in the past sought to dismiss the claims of a crack among them, the attitude of Mr. Duke since his exit from power have sometimes sent disturbing signals to some of the elements. Of most concern has been Mr. Duke's flirtation with the anti-PDP collation of civil society and politicians in opposition to their political party, the Peoples Democratic Party, PDP.

Mr. Duke's efforts were capped by his well reported and shocking expose during a civil society meeting in July 2010 on how Governors rig elections. It was at that time believed to be an act of political suicide for a Governor who was himself a successful operative of the PDP machine.

Suggestions that Duke may himself be directly opposed to his friend and successor's second term, however, remain farfetched.

The possibility of Bassey succeeding Imoke has recently become an issue following concerns that the prospects of that could well alienate a substantial section of the State. Bassey like Duke is from Cross River South, while Imoke is from the Central Senatorial district.

Should Bassey be positioned to succeed Imoke, it would cause disaffection among the people of Cross River North senatorial district who have for long expressed reservations on their perceived marginalization in the distribution of political power.which till date is yet to produce a Governor for the State.

Vanguard learnt that Imoke had at one point reassured political stakeholders from Cross River North that they would not be forgotten in the scheme of power, suggestive of the fact that the pact to bring Bassey to succeed him may well have been dumped.

However, a former member of the House of Representatives for Obudu/Bekwarra/Obanliku state constituency, Chief Paul Adah had said that there was no crack in the ranks of the Peoples Democratic Party, PDP, in the state that could put Governor Imoke under pressure.

He was reacting to a newspaper publication that alleged that there was a crack in the ruling party in the state that had put the governor under pressure and the alleged marginalization of the Cross River North Senatorial zone arising from the appointment of the state ministerial position from the South.

The ministerial slot it was learnt had been reserved for the North but circumstances perhaps beyond Imoke had gravitated the office to the South thereby raising concern in the North.

But investigation gathered revealed that the Nigerian Ambassador to Mali and close associate of former Governor Duke, Chief Sonni Abang has been oiling his political wheel to challenge the incumbent in the April 2012 governorship polls.

Although calls put across to the Nigerian envoy to Mali to confirm the alleged declaration to run the 2012 governorship elections could not go through as he was said to have gone back to Mali last week, it was gathered that the immediate past state chairman of PDP had signaled his intention to go for the number one position in the state and was said to have commenced consultations.

Gov. Imoke and Duke
According to a close aide of Ambassador Abang, the tenure of the envoy may come to an end in the next two months and the former PDP boss in the state was said to have started bringing home his things in order to face the challenge.

A source that spoke on the condition of anonymity, had alleged that Chief Abang and his associates would canvass for a fresh primaries to be held for the party, but if the PDP decides to go by affirmation, the envoy with his group would join another party to wrest power from Imoke.

Another Duke's close associate that was said to have indicated interest in Imoke's office is the immediate past Minister of Environment, Mr. John Odey. Soueces indicate that the pressure on Odey to contest for the postion was responsible for his inability to return to the cabinet.

Apart from the two, there are speculations that that the former Chief of Staff to Duke, Chief Jimmy Aniyom who contested the primaries on the platform of PDP for the Cross River South Senatorial zone is now directing his eyes towards the Government House.  Some allege that his quest may actually be the office of deputy governor, perhaps in a joint ticket with Abang.

However, the goodwill which Governor Imoke continues to enjoy from elements that were once loyal to Duke and his successes so far would be a challenge for his challengers within and outside the party.

But then, the ambitious pact of the three young men would may have grown into a tall, indeed very tall ambition.