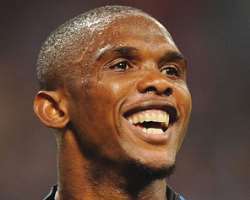 Samuel Eto'o
Cameroon captain Samuel Eto'o will complete a big-money move to Anzhi Makhachkala this week, according to Italian press.

The protracted transfer saga between Inter Milan and the Russians is due to be tied up with a fee of around 20-30 million euros being agreed and Eto'o signing a deal worth 15-20 million euros a season.

Italian press say Eto'o will undergo a medical test at a clinic in Rome on Thursday with the official announcement of his signing set for Friday.

However, the 30-year-old trained with Inter on Tuesday as Italian media reported that the two clubs are still thrashing out an agreement.

Eto'o is the most decorated player in African history having won the Champions League three times, twice with Barcelona and once with Inter.

The four-time African player of the year also won three league titles with Barca and one with Inter while with Cameroon he has twice won the African Cup of Nations.