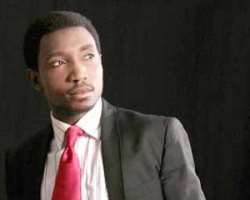 By May 2007, it will be exactly two years since he won the'West African Idol' singing contest sponsored by Celtel and he's still the only singing idol to be crowned in West Africa.

Before that competition that shot him into limelight, Timi Dakolo was a largely unknown young singer born to a Nigerian father and a Ghanaian mother in Ghana, before they moved into Port-Harcourt, Nigeria, where he was raised.

His unusual husky voice is probably the extra that placed him above 'Omawunmi'- his first runner up in the competition. Since the fail- ure of the organisers in delivering the SonyBMG contract they promised the winner of the competition, the resilient singer has refused to allow that deter his newly-found music dream, for which he had always had passion but never thought he'd make a living off. In this interview done on the wheels, Timi,

How are you today?
I'm fine, thank you.
How long have you been wearing the 'Idol' tag for now?

Almost two years.
Does it feel as exciting as it was when you just won the competition?

Somehow when I reminisce about the whole competition and the excitement of when I won, I'm still able to feel about seventy per cent of the initial excitement.

Does the fact that you've not been able to hand over to a successor get to you at all?

They (the organisers) have their reasons. I only know that the contract I signed was for a year and that has since elapsed. I didn't ask questions on why it did not hold last year and I don't know why I should so...

So do you still consider yourself the 'West Africa Idol'...?

Yeah, yeah. I'm the best but... see I'm just a normal guy. The crown has come and gone so I'm just Timi Dakolo. Yes there hasn't been any formal handing over ceremony so maybe I'm still the West African Idol.

When did you relocate to Lagos?
After Idols, I couldn't go back to Port Harcourt fully. Not because it was part of the contract I signed but just because, Lagos remains the entertainment headquarter in Nigeria.

Did you have plans of moving into Lagos before Idols?

No. Idols was not even in my plan for that year (2007) though auditioning for Idols actually started in December 2006.

Between May 2007 when you won the competition and now, how much change has winning brought to you?

I'll just say it's a giant leap financially, in terms of recognition, popularity and all that. There are certain things that I can't do again because of winning Idols. Before I didn't have a car, now I have two.

Which car brands are we talking about?
A Kia Picanto and a Toyota Corolla.
How much has Idol been able to accomplish for you musically?

Many of us have been expecting your album since you won. What happened to the singing contract that came with your winning?

It was a SonyBMG contract that obviously didn't work for reasons best known to them. It was a recording contract and the part of the artiste is to sing for the recording company, isn't it? It just didn't work and here I am today.

Was it that you sang and they didn't like the songs or ...?

(cuts in) They didn't even prepare the atmosphere for me to sing and that's just all. I'll leave my lawyers to handle the contract part of it.

Sounds like you're contemplating a legal suit...?
There's no legal suit but... See, I've moved on. Anything I'm doing now is on my own. I don't talk about the contract. I leave it like it is.

But when you won your expectation was high, wasn't it?

That's life for you. Ups and downs, stand stills and turn arounds... I have no regrets as per Idols and everything because it was a wonderful platform for me.

Do you bear any grudges against the organisers?
No, none at all. If they want to hold Idols again, I'll welcome it because there are a whole lot of Nigerian youths that can sing and they need such platforms to push them up.

Before Idols, I'm sure you'd never heard of me (turns to this reporter)? It's the same way, there are a lot of talented people who are unknown. If the right opportunity and platform are given to them, we'll probably sing better than our American counterparts.

I would encourage anybody to take part in Idols because you never know where it'll take you to. They fulfilled every other thing they promised to give except the recording deal. And for me, it was the main koko (thing).

Were you thinking of pursuing a career in music before 'Idols'?

Did you serve after studying Mass Communication?
No, I still owe Nigeria that.
Since you are a graduate, it means you can get a job. So why music full time?

I don't want a job. I want to work for myself. I had always wanted to be my own boss. I never thought I'd take up music for a career while I was growing up, not even before Idols came. Someone said it's more riskier not to take a risk than taking a risk itself.

Idols made me begin to see music as a career one could live with. Idols did that for me, that's why I say I never regret it for one moment. If I were to do it all again, I would take the same steps all over again. Do you know the joy it gives to you to win among your peers.

The feeling alone is satisfactory; especially if the feeling becomes a driving force, it means that there has to be more to life than what you see.

Did you try to push if the recording deal could be moved from SonyBMG to another record label?

We tried to talk but it just didn't work. I and my manager did all we could but... Let's leave the contract thing and talk about me. Am I not doing very well by myself? I'm fine on my own. Like I said, nothing just happens.

So what's new with you?
I just released my single 'Let it Shine'. I'm bringing up a whole lot of things. I'm doing a song with M.I, it's coming out very soon. It's titled 'I love to love you'. I'm trying to take one step at a time. It's not how fast you get there but how well you do when you get there.

How soon are we likely to have an album from you in our hands?

Second quarter of the year. I've some songs already but I'm still recording more. For now, it's only M.I I'm collaborating with. The album will contain about ten or eleven songs. Expect good songs in the R n B and Soul genre. I'm still playing with a lot of titles for the album so I don't have a title for it yet.

And videos...?
I'll soon start working on my 'Let it shine' video. I'm still cooking the concept in my head so when I'm done where I decide to shoot it will determine who directs it.