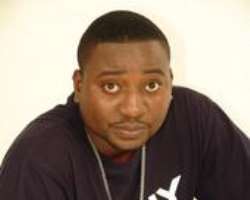 The call came on sunday febuary 1,2009 and the caller identifiedherself as efosa etiose.

hear what she had to say''i used to be alecs personal assistant,infact i was there when both alec and kefee started dating.kefee is not wayward at all and those who know her will confirm.i was very shocked to read alecs interview and the things he said about kefee.i cannot sit down and watch him telling so much lies because he feels he has access to grant interviews and lie.

my reason for calling you to tell you that alec used to beat the living daylight out of keffee and it is not a secret so i wonder why he is lying about it.

that was what caused the major problem between them because he talks a lot and he used to say it then,he even said that kefee was too stiff and unromantic.''

Stella:you were there and know that this is what caused the problem?

efosa:of cause,does alec have a job?everything he has is kefees sweat,she used to play shows shes not even aware of just to remove shame because he used to collect money and book shows for her even without telling her.she was paying all the bills including houserent and salaries of all the staff but nobody knew about this but now he is granting interviews and telling lies.the only thing about kefee is that her mouthis sharp and whenever alec comes to pick her up late from the office she used to scold him too sharply.i am saying it now that alec used to beat kefee for little unreasonable things.she is lucky to have survived his beatings thats all i know.alec was sleeping around with anyone that works for them and it was no secret.

ehen,there was one time that wristwatch made them have problems,alec wanted kefee to pay for a watch and she opted to settle all their bills first,he beat her up for this.

Stella:so you no longger work for both of them right?whats your relationship with both of them?

efosa:we are friends,i talk with both of them,i was with alec last on january 2,2009.

Stella:why are you doing this?
Efosa:i hate people who dont tell the truth,i am shocked that alec choose a public forumto lie,he should have kept quiet or maybe he has forgotten that people who know what he did to kefee can come out too and talk for her,i hate liars.they have broken up,they should go their seperate way,whats all this unnecesssary advertisement?alec should respect himself and stop lying all over the place abeg.i don talk my own.