BETWEEN CLARION CHUKWURA AND STELLA DAMASUS 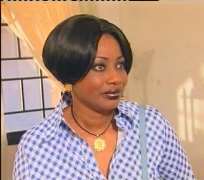 Although many know the marriage has crashed, others still do not believe it is over.

One of such people is Clarion Chukwura, who not only nursed the feelings but also voiced her belief out few weeks back at an event held in Lagos State.

Acting as the compere of the event graced by top entertainment people, Clarion who wanted to observe all protocols introduced Stella in this respectable manner;” In the house is one of Nollywood's finest, they call her Miss but I call her Mrs. because she is actually married.So,Mrs Stella Damasus-Nzeribe please stand-up and take a bow.”

Stella actually stood up and a round of applause followed. But as the event was coming to an end, Stella got an opportunity to address the audience. She climbed the podium and re-introduced herself saying; Good day ladies and gentlemen, my name is Miss Stella Damasus.