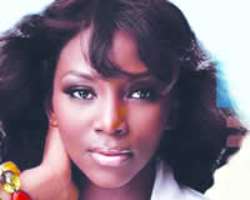 •Genevieve
Star actress, Genevieve Nnaji, briefly came under fire on Sunday when she took to social networking site, twitter, to announce the death of veteran actor, Sam Loco Efe. She was on twitter to say the old man was dead and to commiserate with fans and family.

For the records, that would be the first time the mother of one would be talking about the passing away of anybody.

Hardly had the dust settled when she came on again to apologize that she had been 'realiblily' (sic) informed that the man only collapsed, but not dead. She went on to buttress her point by saying she had spoken to family members of the late Sam Loco, who confirmed he was only hospitalized and not dead. She was apologetic and blamed the news channel she got her earlier information from. Many joined her to blame the Nigerian news channel and many others 'sympathized' with her.

Few hours later, it was actually confirmed that Sam Loco was dead, and Genny at that point took the comical approach by saying she had created a lot of drama, apologized and vowed that such won't repeat itself. However, it was too late as many viewed her tweets as an insult to the news sources that announced the death of the veteran actor.

One of such people was Mr. Chris Kehinde Nwandu, publisher of The Evening Whisperer based in Abuja. He sent a blackberry broadcast, calling Genevieve an illiterate. In a broadcast that elicited response from Ali Baba and Julius Agwu, Chris fired from all cylinders.

Below are the blackberry broadcast:
'When we broke the news of the demise of Sam Loco, we were called all sorts of names for spreading false rumour. Genevieve.

'…But a local news channel just announced his death as well. Journalism is crap in Nigeria… What do you expect from a half-baked illiterate like Nnaji. Any idiot can be an actress, not Journalist.' -CKN.

Still on Genevieve Nnaji:
'… I wanted to unleash the second dragon, but when I read the BB response from two of my best friends, I decided simmer…ALIBABA..CKN. You are doing a great job, please activate the spell check on your phone… JULIUS AGWU..CKN correct your spelling from ILLITERTATE to ILLITERATE before Genevieve Nnaji calls you an illiterate, too…. Case closed. Have a nice laffing day..CKN