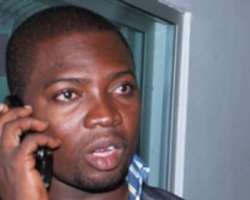 My intention was to do a paper on Mercy Johnson and her fracas, but I went browsing few minutes ago and came upon a heated thread on the ever famous Ghana celebrities website. I read all the brouhaha over the Ghana Nigeria and who is best between commentators and only picked out two things: FRANK RAJA HAS DONE IT AGAIN!! STOLEN SOMEONES STORY.

I will be sad if Saidi Balogun will not do anything about this.

Frank Raja claims to have made the first two cast film and its his new thing to hype. Not knowing, it is a rip-off Saidi Balogun Modupe Temi. trailer above. In his trailer he says its the first ever two cast film starring Majid Michel and Yvonne Okoro. Now, its not bad that he is trying to make a two cast film, but to copy the exact story?

To make matters worse, he uses a popular folktale in Ghana about a man and wife who don't speak to each other but leave notes. It was used in Akan drama years ago. And Frank Raja will put out his google eyes and take credit that he is the first. The guillable girls dying to become stars will fall for his bragging and spread their innocent legs apart for him. If we are advocating for sanity in our film industry, people like this Frank Raja guy have to be stopped. Its sad Frank Raja is allowed to do this kind of thing and get away with it too. Its about time someone called him to order.

I have lost count of the number of stolen movies this man has made. Who keeps on giving him money? The person runs the risk of a bad lawsuit one day. But Saidi, you need to either see your name on that movie for story credit or you take Frank Raja to the cleaners!!

here is the trailer to the stolen version