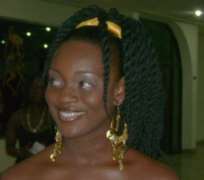 Ah Ha,
Now I know why Jackie Appiah dresses like a Barbie doll in movies. Did you read the interview she granted to www.nollywoodgists.com where she said she cried to the costumer regarding the clothes she had to wear as a downtrodden character?

Left to Jackie alone, she'd have dressed like a clown if she had a choice.

Today is for Jackie Appiah, I have to give her some serious bashing for the costume.

Jackie, you are not ready to become an actress. Go and become a model or hang out with drug addicts inside monte carlo. That is what you can do. Not act. I know this is harsh, but when an actress can open her mouth and say something that ignorant, it gets on my last nerve. You complain about the costume you had to wear. Is it a force for you to accept that character? Charlize Theron looked terrible in Monster. She did not complain and she won an oscar. Since you want to look like a flag all the time, maybe you should rather become a mascot.

I watched a movie called Lost Desire with Jackie and Kanayo. I had to fast forward all Jackies scenes because of her wig and her colors. Oh Christ!!! I mean, what is that? in one scene she was crying, he whole scene was just her sitting against a wall crying. what was Jackie wearing? Yellow blouse and pink petti-coat, pink earrings, pink shoes, yellow head band and pink make-up. Her wig was huge, one part of her eye covered by the hair.

And we want to compare to Hollywood, she is probably hoping to work in Hollywood. Dream on. You cannot even act Jackie Appiah. Saying lines and applying some element of emotion to it is not acting. Making faces and calling up tears. How this girl became popular I don't know. Thanks to Venus films I guess. Thanks to the ban on the Nigerian actors and the leaving of the country of the great Ghanaian actors. Suzzy Williams death (RIP) is another thing that helped her. otherwise, who is Jackie Appiah? It is true what they say, when all the men in the village die, the leper becomes king.

But why am I crying, when our society is hungry for the mediocrity, this is what we get, people like Jackie Appaih become ACRAG winning actresses and that swells her head, she thinks she is great.

I am angry, very angry. I want to see our movies transcend our borders, I want to show our movies to other people and not have them ask me Is that the same girl? because of the multiple wigs and clothes. Jackie appiah changes so much, all the plastic jewelry and cheap clothes and colors. I am not hating, I am concerned and really frustrated that our film industry instead of getting better is becoming a place full of fake people and fake lives. Situations that do not reflect what is really going on back home. People watch people like Jackie Appiah dressing like that and they think since she is on TV, that must be the in thing. They want to dress like that to and go to all extents to dress like that or acquire those things. (the movie Jenifa is a good example) Girls start chasing men, married men for money, AIDS, STDS, teenage pregnancy....

No, it is not far fetched. Everything has a commencement. TV influences us a lot so people like Jackie owe a responsibility to their audience to educate and educate right. No, don't bring Hollywood stars fashion on red carpet here. That is different and they do not look like clowns. Their clothes are donated by designers. They pretty much are just advertising the clothes for the designers. In real life and in their movies, they dress realistic.

Someone needs to talk to this girl, or anyone who knows her should get me her contact. I want to ask her why she dresses like that in movies and explain to her that is is not appropriate and it is NOT NICE.

I expect all the rude comments to come pouring in. My spoils of war. Over to you.