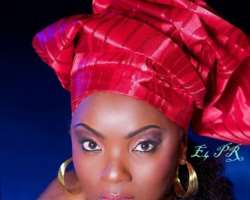 She is highly elusive but she is one actress that has kept a clean sheet in an industry where almost every actress has a stained record. Transforming from one of the crybaby actresses to one with style, panache and charisma, Chioma Chukwuka Akphota still comes across as that girl next door. In this interview with Chibueze Okereke she lets us into her simple but amazing life as an actress, mother and role model.

Was there any opposition from your parents when you opted for acting?

Of course! My parents didn't take it lightly that I opted for the movies. My mother, for instance, was of the opinion that young girls who're in the field are regarded as loose and never seen as being able to settle down in a home. In the course of events, my parents somehow came to accept my choice because I'd promised not to let them down. That's not to say that I'll not do anything wrong or that I'm not capable of failing.

Looking back to where you're coming from, would you say the acting profession has been rewarding?

In all truth, I must confess that the industry has been very rewarding. I can afford a lifestyle I ordinarily wouldn't have been able to. Huge rewards have come my way that I can't even begin to mention them. I do other things alongside being an actress but I don't want to disclose them.

Nollywood has come a long way, a very long way. It's an industry that sprang from absolutely nothing. Today, it's a great industry that has been rated third largest in the world. This goes to show that the Nigerian movie industry has come to stay and when the necessary support comes, it will be explosive. In the same vein, I'd say that we still have a lot of work to do. In terms of content, technical know-how, production, detailing and professionalism, we still have a lot to do.

In your opinion, what must be done to check the scourge of piracy?

When it comes to the movie industry, piracy is a very sensitive issue. In my opinion, there has to be a proper structure before the government can even help aid copyright protection and structure investment in the entertainment industry. This will in turn boost the economy of our country. Nigeria's entertainment industry, with particular reference to Nollywood, is the future of this nation's economic stability and the sooner the government and even the private sector help out, the better for all of us.

Do you have any production of your own?

I haven't produced any movie of mine yet, but works are in the pipeline so you'll be hearing from me soon.

Of all the roles you've done, which would you regard as the most challenging?

As an actress, I can't say one particular job is more challenging than the other because virtually all the roles I've taken are challenging.
You're known to act mostly good girl roles. Why's that?

I'm a very versatile actress. I don't know why I'm given mostly those kinds of roles, but I think that's because I started off with them. In the industry today, when directors find out that you are good at a particular role you get boxed in. I'll give you an example. The evergreen Patience Ozokwor started playing very emotional roles and was very good at it, but when she played the role of a bad mother in-law she got boxed in because she did it well and it has continued like that. There are other cases, but since I'll soon produce my own movies I intend to do little skits of different characters.

In the industry today, who do you regard as your role models?

Certain people inspire me in the industry. I particularly like Kate Henshaw-Nuttall for her dedication to the profession. She's one person I regard as a disciplined actor. She's very focused and hardworking. I'm also a fan of Auntie Joke (Joke Silva) and Ramsey Nouah.

Would you say being an actress has affected your life in any way?

Being an actress, like I said, has lifted me in many ways than one. To crown it all, being appointed as a brand ambassador for Africa's fastest growing telecommunication company, Globacom, has been very rewarding. I've also been blessed by my efforts in the industry being crowned with awards. There's a long list of them and the very one that readily comes to my mind is winning the Africa Movie Academy Awards' Best Actress of the Year 2007 and the African Film Awards UK for Best Actress in English Language 2010.

What dictates your fashion sense?

My mood determines my fashion sense but I'm a very conservative dresser. I don't expose my vitals. I wear what makes me feel good and comfortable. From contemporary to African, I wear them all. I don't wear a particular designer. I just love what looks good.

How do you combine being an actress with running your home?

My marriage doesn't infringe on my job in anyway. I make sure I take care of the home front before I leave for work, especially if it's outside town. Like I have always said, I'm from a good Christian family.

What can you not be found doing?

In a few words, how would you describe yourself?

I'm Chioma Akpotha - a wife, mother, actress and, most importantly, a Christian. I grew up in a very large family and although we were not rich, I and my siblings were very content with what our parents had to offer. My growing up years was pretty normal. As a child, I did what other children did. I read my books, did my homework, ran errands and did my chores properly and on time too. I also played hard like other kids of my age did.

Let us into your educational background.

I had my primary education at Onward Nursery and Primary School. From there, I moved on to Federal Government Girls College Onitsha for my secondary school levels and later graduated from Lagos State University, where I studied Banking and Finance.

How did the acting journey start?

While growing up I'd always dreamt of being on TV; so when I went for my first audition in 1998 it further confirmed my desire to be in the field of arts. I played some skit and minor roles until I played my first major role in the year 2000 in the movie 'The Apple', directed by Lancelot Oduwa-Imasuen and produced by Theodore Anyanji. After my first audition in 1998, I didn't do much because I didn't know anyone and how to go about anything in the sense that I didn't know where and what time to get to the audition grounds. But I was determined to make it on my own, with or without any help from those who were already there. So on this fateful day on my way to school a producer called me for an audition and there I did my first major role and there has been no stopping since then.