How undergraduate attempted to rape 5-yr-old 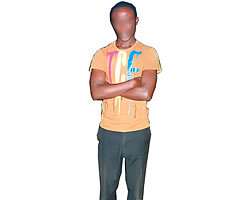 A five-year-old girl is not known to hold any point of attraction. With no hips, breasts or other curves that aesthetically attract the male folk to the opposite sex, such a young child is expected to be protected from any form of danger by older ones, male or female, particularly in different African societies where the well being of children is seen as the duty of all and sundry.

For Taiye (surname withheld), a 200 level student of a College of Education in Oyo State, however, this was not his thinking when he decided to defile a girl, Mutiat (not real name) by attempting to rape her. Taiye's parents and the girl's mother have their residences situated beside each other in Saki town, Oyo State. As a community that believed in neighbourliness and oneness, it was common for mothers to leave their children in their care of co-tenants or give them them freedom to mingle with their agemates to play.

So, what Mutiat's mum, who runs a beer palour in Saki, usually did was to send her five-year-old daughter home with her househelp so that they could have dinner and go to bed early.

However, things did not go as usual on Monday July 25, 2011 when she sent the girl home. Before she returned home, something had happened to her little girl that could have marred her life.

Madam Raimat had woken up her daughter early the next day so that she could go and ease herself without wetting the bed. To her surprise, her little girl refused to urinate, telling her mother that her private part was smarting her. When asked why this should be so, Mutiat opened up to her mother that it was Brother Taiye that used his penis to poke her private part, grounding his organ against her thighs and her vagina.

Shocked to her bones that her five-year-old girl was taken through such immoral act, Madam Raimat went to the accused person's father to report the young man's indecent act but Taiye's father replied her that he could not defend his son since he was known to drink and smoke.

According to Madam Raimat, “as we tried to know why Taiye committed such an act, he kept denying ever doing such a thing but my daughter kept pointing at him. There were other young men around the palce, why was it only him that the girl was pointing at? This girl is my only child, as I've lost a number of children to death.

“When I informed the girl's father, he instructed me to report to the police. It was the police who took her to General Hospital, Saki where it was discovered that she had some bruises around her vaginal region though there was no penetration. I was just imagining what could have happened to my little girl if he had gone all the way. She was given drugs and injections”.

Taiye admitted trying to have carnal knowledge of Mutiat but denied that it happened in the little girl's mother's room. According to Taiye, “Mutiat was in front of my mother's shop and was playing. I called her and put her on my laps. The place was dark so nobody saw what I was doing”. Taiye claimed he did not remove his trousers neither did the girl protest his action. When asked what the attraction to the young girl was, Taiye answered “please Ma, help me. It was the work of the devil”.

Taiye revealed that he had a girlfriend with whom he had never had sex. On whether that was the reason he decided to abuse the little girl, Taiye went pleading again. He also said that contrary to what his father was alleged to have said about his drinking and smoking status, he had dropped the habits immediately his father spoke against it in the past.