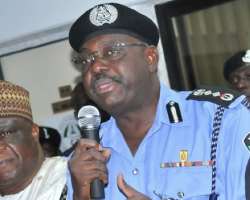 Inspector Bukar Kumo was shot inside his home located in the Bulabulin Ngaranam district of Maiduguri at about 7.15pm by two men who eyewitnesses say arrived in an old VW Golf sedan. Kumo had just returned from the mosque.

There has been no information on why he may have been assassinated.

Also, a school teacher in the employment of the federal government was shot and killed outside his family home located along Waziri Musa Street of Maiduguri on Sunday night, just after the family concluded Ramadan prayers for the day at about 8.20pm.

Nurudeen Algori Umar, 40, was until his death a teacher at the federal government college Maiduguri.

The victim’s family say three unidentified gunmen attacked Nurudeen, shot him severally and shot sporadically into space as they fled the scene.

Borno State has been plagued by violence mostly orchestrated by members of the radical sect, Boko Haram, which says it wants a wider application of Islamic law (Sharia) in the north.

The joint security force charged with restoring peace and sanity in the state through its spokesman, Lt. Colonel Hassan Mohammed said investigations in the shootings had begun.