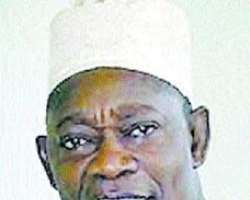 Major Hamzat al-Mustapha, the former Chief Security Officer to late Gen. Sani Abacha, yesterday at the Lagos High Court, Igbosere, continued his testimony with a revelation of how Chief Bola Ige, former Attorney General of the Federation and Minister of Justice, was used to scuttle the validation of the June 12, 1993 presidential election presumed to have been won by the late Chief M.K.O. Abiola.

Al-Mustapha who is standing trial for the murder of Alhaja Kudirat Abiola, also tendered a VHS video cassette of the late Chief Abraham Adesanya, Ige and other Yoruba leaders' visit to Aso Rock.

A letter by Major Hamza al-Mustapha, former Chief Security Officer (CSO) to the late Head of State, Gen. Sani Abacha, was read at a Lagos High Court, Igbosere, yesterday. He is standing trial for the murder of Kudirat, wife of the late Chief M.K.O. Abiola, the presumed winner of the June 12, 1993 presidential election. Al-Mustapha promised to bring the letter to court yesterday indicating how the late Attorney-General of the Federation/Justice Minister, Bola Ige (SAN) was used against the validation of the election.
Led in evidence by his counsel, Olalekan Ojo, al-Mustapha read to the court, contents of the letter in which he drew the attention of the late Chief Ige to the fact that he had been unconsciously used against the late Abiola. The court admitted the letter as exhibit.

“You will recall that you were unconsciously used to arrange and convey Chief Abiola's family to come and see him purportedly in preparation for his release on the eve of his murder.
“You and other Yoruba leaders were unconsciously used to suppress the agitation of the people with inducement. You will recall that General Abdulsalami was honoured because of the way he was able to manage the reaction of the people over Abiola's death. Even your present appointment was in furtherance of the same agenda.”

“I wrote the letter during the Oputa Panel sitting in Abuja in July 2001 and I sent it through my counsel, the late Chief Celement Akpamgbo (SAN) Amobi Nzelu and Bala Ibn Na'Alla who led me at the Oputa panel, they were also aware of the letter. “Athough Chief Akpamgbo is no more, Amobi Nzelu and Bala Na' Alla are alive.” The letter was also admitted as exhibit by the Court. In the letter, part of which was read, al-Mustapha wrote Chief Ige; “ you were only used for the purpose of the eliminating Chief Abiola, the 14th Aare Onakakanfo of Yorubaland for selfish political agenda,” he said.

Again, he revealed that but for sheer providence intervention, former President Olusegun Obasanjo would have been executed for the phantom coup of 1995 if the then military regime had acceded to the position of General Abubakar Abdulsalami. al-Mustapha told the court that following the death sentence passed on Obasanjo and those implicated in the coup, some officers including himself and the former military administrator of Lagos State, Col. Buba Marwa (rtd) said that the sentence should be commuted.

According to him, at the meeting of the Provisional Ruling Council (PRC) where the final fate of the convicts were to be decided, General Abdulsalami insisted that the full weight of the 1976 decree on coup, enacted by Obasanjo should be applied.
“At that meeting, General Abdulsalam said General Obasanjo should be made to face the 1976 decree he enacted for coup plotter. He said Obasanjo is one of the most irresponsible human beings. He said other unprintable things about him.

“I recorded the meeting on video where the General said all these, even though it is illegal. I kept the tape until 1998 when General Sabo who was detained with me for plotting to overthrow Abdulsalami was released. When he was leaving detention, I whispered to him to go and get the tape where I kept it and ensured that it gets to Obasanjo to warn him about certain people pretending to be his friends,” he said.
Earlier, as promised on Wednesday, an audio visual tape on the visit of chieftains of the National Democratic Coalition (NADECO) led by the late Ige was showed to the court.

The footage of the video clips showed Afenifere leader, the late Chief Abraham Adesanya responding to State House reporters who interacted with him shortly after their meeting with Abdulsalami. Responding; Adesanya denied reaching any consensus with the government, saying: No agreement had been reached with the Head of State, other than that he will consider the proposal before him.

“Our demand of Government of National Unity (GNU) still stands. We are also demanding that, Sovereign National Conference (SNC) should be convened to fashion out a new constitution for the country,” However, Chief Adesanya was non-conmittant on the death of Chief Abiola in custody.

According to al-Mustapha, the meeting with Pa Adesanya and his team was hosted by General Abdulsalami and the then National Security Adviser (NSA), General Abdulsalam Mohammed, who he said allegedly raised the memo of July 8, 1998 requesting for the withdrawal of money from the treasury of the Central Bank of Nigeria (CBN), sums of $ 200 million USD, 75 million pounds and N500 million naira. The video tape which said was the record of the depature of the leaders revealed where they were ushered into their vehicles. He explained that the video tape which contained the arrival of the leaders was among the tapes taken away from his residence when he was arrested in 1998.

On his relationship with General Abdulsalami, al-Mustapha said that at the critical stage when General Abacha died, there were a lot of interests trying to succeed him. “At that time, he was not the best man, but God used me to help him to ascend the throne.
“For four days, General Abdulsalami and I had meetings at Aguda House where we discussed serious national issues and I was involved in handing over of everything to him. Even the dust in General Abacha's room, I gathered it in a nylon bag and handed it over to him along.

“During our meeting, I demanded for the safety of Chief Abiola and the immediate family of General Abacha. Those were my personal requests out of the 16-point agenda we agreed upon,” he said.
He noted that even while in Kirikiri prison, a Federal Director of Public Prosecution, Mrs. Stella Onitiri, was sent to him to recruit him as a witness against the Abiola family in the suit against the Federal Government in which the family is demanding for damages over the death of their bread winner in custody.

He also alleged that the former Chairman of the Economic and Financial Crimes Commission (EFCC), Mallam Nuhu Ribadu, tortured him and other accused persons by constantly giving instructions to the driver that conveyed them to the court to drive roughly . According to him, he narrowly escaped being killed by those who brought them to Lagos, led by Ribadu because of a disagreement between them and the then Commissioner of Police, Lagos State, Mike Okiro.

He told the court that in July, 2001, he wrote a 11-page letter to the late Chief Ige in which he alerted him that he had been unconsciously used in the murder of Chief Abiola. On a final note, al-Mustapha denied any complicity in the murder of Kudirat Abiola, insisting that he had been kept in detention because his enemies, particularly viewed him as the late Abacha's ghost, which should be done away with at all cost.

“Those who wanted Abiola dead see me as the enemy. Those who wanted to succeed Abacha but felt that I played a role in their not getting there see me as enemy, that was why they initiated this charge against me. The remote control is in Abuja but they are not telling the Lagos the truth about the matter.
“It is totally untrue that I sent anybody to go and kill Kudirat Abiola. I was earmarked for punishment. They cannot afford to have me outside. If I had conspired, they should have brought the evidence either from the SSS or military intelligence.

“I did not give any officer any UZ gun or ammunition for any assignment. I did not know anything about the burning of General Alani Akinrinade's residence and the Rutam House,” The Guardian office,” he said. Hearing continues on Monday, August 8.