'MODENINE IS A BASTARD AND WILL DIE A PAUPER' -------RUGGEDMAN 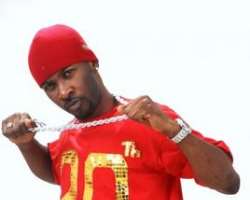 It took publishing the lyrics of mode nines song to get king of rapper micheal stevens a.k.a ruggedman to respond. contacted ruggedman to hear his side of his story on why he is being so badly dissed by his colleague.below you find the reply of an angry man.

ruggedman does not mince words in this chat and lets us know how he feels about the rap-fight.if you think hell hath no fury like a scorned women,then you aint seen nothing yet!..read his interview with STELLA DIMOKO-KORKUS.

1....-have you listened to mode nines lyrics cursing you out?

---I havent been bothered to listen to the track but thanks to Encomium I have read the lyrics.I will not waste an instrumental on replying his childish baseless words.I am too big and too busy to do thatwho is mode9?in his whole life in the industry,he hasnt been able to do anything for himself let aloneanybody around him.

2....what do you think the problem is with him?
...i dont know but i feel his pain.he has been in the industry for so long and is about the oldest rapper in Nigeria and yet still has next to nothing to show for it so I think I understand his grouse.

3...so this beef between you both is real and not hyped?

....no,not on my part.if he wanted to hit fame so badly,all he had to do was meet people like me,D'Banj,2face,Naeto C ,infact all the successful artistes and ask to be shown the way instead of trying to beef.Beefing is old school,especially when you are beefing a rapper who is more successful than you in all ways,I am hoping its a strategy hes using and not jelousy really.he cant compare himself to me,I have more awards,rocked and still rocking more shows than he will ever do to date and I have been on a few shows he has been lucky to be a part of and seen how the crowd responds to him and that is when they do at all. i am on to bigger and better things because I have been able to achieve a lot for myself and people I have come in contact with.I have done more for the industry than any rapper out here now.Instead of him trying to do something positive that he will be remembered for he is trying to go the beef route, now that boys are making mad money from wahala moves I made years ago that revolutionized the industry and made it better.

4...but mode nine is a man,you can easily walk up to him and straighten things out.

.....why should i?Its sad that as old as he is,he is still fighting over who is a better rapper and who is not whilst other artists are making good music that rock shows and clubs/partys and make more money that he can only dream about.Come to think of it,in all his years in the industry he has never had any song that you hear in a club or party and those are really the kind of tracks that get you shows that get you paid.He can go on his childish yarning spree talking about me having a skinny neck like guinea fowl,coconut head,he said that Maintain got more money than me,that I am a dancer now like Kaffy and Suzzy but what he fails to realise is that he is out watching me and my moves but he is no where near me or any of these people he has mentioned.He fails to see the log in his own eyes and the hole in his pocket .See wetin desperation dey cause.His one and only brown timberland boots and tye and dye shirt are more popular than he is amongstartistes.

5..maybe you unknowingly stepped on his toes.
....i did nothing of that such.The brother cannot understand why a rapper he thinks he is better than is moresuccessful than he is.He hasnt been able to achieve anything for himself or any of his crew to show for themany years he has been an artist and He hasnt had any hit track thats gotten into clubs and partys to get him high paying shows but Ruggedmans been getting them thanks to 'Baraje' and my other hit tracks.

6...since this is not a publicity stunt,maybe you can address some fot he things he said concerning you.why did your dancers leave?you tried sleeping with them?

....He said my dancers left me cos they wouldnt sleep with me,you can call them all and ask them about me and how we were like one family when we worked together.About my dancers I can say I brought the best cropof dancers Naija entertainment has.From sensational Korede,Patience,Toyin,Michael who made up the dance group DANCE NA THE MAIN THING,A name I christened them from a line from my Baraje track.Flexx is with P.Square doing great,Shock graduated and is working now.Suzzie has her own dance school,so does amazing Kaffy who went on to get into the Guinness book of records.please he should respect them because they have achieved more than he has in this industry.

7...but mode9 is a talented rapper doing his thing.

....I am sorry I have to say this but he went as far back as picking lines from my 1st album,meaning envy has been eating him up all this while.At least he got lines from my 1st album while I and a lot of people on the streets cant remember any from any of his albums/mixed tapes because they were all the same boring baseless battle raps that nobody really listens to.The only track that a few people are talking about on his album now is the one he kind of directed at me.Remove that one and their is nothing else.I still dont understand why wonder rapper is still too lilly livered to mention my name in any of the 8 or 9 tracks he has been directing at me all this while.he is talented?Most of his friends who used to do rap all American style have seen the light and switched their game to using our local lingua like I preached in my award winning track Ruggedy Baba and its working for them.Six Foot Plus,Obiwon and even Ilbliss got a great track in 'You Go Wound o' when he mixed it up with pidjin.it is only a stubborn fly that will be buried with the corpse.

8....why are you the only rapper mode nine is beefing?

....oh he does it to everyone,just that my own is out of more jealousy.he laughs at other rappers behind their backs,talking about how weak or wack they are.Even after they help him out.Please he should tell people thename of the Nigerian rap artist that was nice enough to ask him(mode9)to follow him to his shows in Italy and he was paying mode9 a hundred euros and allowing him a little time to perform when he is on stage.mode9 should Talk quick or I will. The only track that got mode 9 his Channel O and hip hop world awards was the one the chorus was done in Igbo.Was that not a good enough sign?Since then,what else has he done close to that?Nada my people.

9...but he says he has some incriminating evidence on you,what could he mean?

.....thats a big joke,he has tried to add suspense by saying he has some incriminating information on me,see as I turn rapper to FBI agent o!.he should please tell encomium magazine,I dare Mode9 to be a man for once anddisclose the incriminating information or he is a bastard and will die broke for ever mentioning anything like that.I am tired of all this rubbish.Is it my fault I am bigger than him?I am street and music smart and work hard.Thats the only part that touched me.How stupid does he want to get with looking for publicity?The next thing he will say I am into blood money.

coconut,my neck is long like a Guinea Fowl and I am skinny and mode9is the best rapper in Nigeria and the rest of the world,infact give him best fuji artist too,what does he have to show for it?Now lets check the Ruggedman he is talking about.I have done more for myself and the industry than he canonly dream to do.Last year alone I won the awords for best rap album,best rap artist and best indiginousvideo concept.What did he get?I have more awards than he can ever dream of,have rocked more shows than him,have made more money than him.Have more popular songs and albums than him.Have touched and helped more artistes.I am and will for ever be more relivant to Nigerian music industry than he will ever be,if he continues making the kind of music he does and continues with this type of attitude,he will not get anywgere.Acts bigger and richer than him are humble to a fault. He says I claim to have dough and I am skinny.Its funny really Coming from someone that has no car or home of his own,he has been squatting with different people till date since he camme to Lagos and I will say their names later if need be.its mad funny I tell you.Meanwhile have run through a BMW 3 Series,A nissan Murano,A Mercedes Benz C Class,A Volkswagen Toureg and I dedicate my new Chrysler Crossfire to mode9,its to inpsire him not to give up,he still fit make am.

11...any last words of advice or as peace offering to mode9?

.....The last thing I will say to mode 9 is that Nigerians and i are waiting to hear the incriminatinginformation he has on me.Please he should not keep us waiting too long. a word is enough for the wise.Hardcore rap,best rapper in the world,lyricist on the roll without financial success will not pay bills and secure his future.I have nothing against him,he should do his music and let me do mine. I will not reply him with a song,so he should not waste his time waitingI know he wants me to reply because that will help him sell cds but I will not,sorry.Network will always be busy here.I have better things to do with my time and I intend to do them.I have been and will always be a pace setter and a go getter and a helper in anyway I can to people whom I can help.Beef only comes when one artist is jelous of the others success.He doesnt need it.He should chanell his energy into repackaging,after all Kanye West is singing now.he should at least look on the bright side of things,if he decides to sing for me again,i will be nodding myhead to his track in my new Chrysler Crossfire.he should leave me the hell alone,i got work to do.