I would have been a footballer – I Go Save 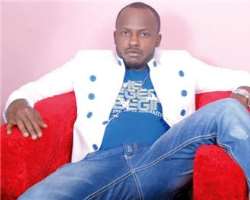 I Go Save, real names Otaghware Otas Onodjayeke, a big names in the Nigeria comedy industry. He came to limelight after performing at Opa Williams' Night of a Thousand Laughs in 2000. With the rise of stardom over the years, he launched his comedy show, I Go Save Unusual in 2009 in Benin, which was sold out. After a successful debut, it became an annual event. His spontaneity and creativity in jokes over the years has earned him several awards at home and abroad. I Go Save hails from Ethiope East Local Government Area of Delta State and is a graduate of painting and general arts from the Federal Polytechnic, Auchi. He spoke with Reporter 'Wale Onifade, on his career so far.

Tell us how you started

My dad said I've been funny in different ways since I was in my teens. I remember vividly gathering my peers together for moonlight stories and dancing to traditional songs that made them laugh. This was done daily back then. It got to a stage that when I am not in the mood for moonlight plays, my peers will put coins together for me just to tell stories and make them laugh. Most times my mood changed and I also enjoyed what I was doing. I joined the social variety club and became the club's comedian, where I cracked jokes and did mock news. Mock news per say was presenting real life happenstances the way news is being read on CNN or NTA, but in a very funny way, which also informs, entertains and teaches. That was around 1994. I Go Dye and I did this for years. Sometimes, we got paid while other times people sprayed us money to appreciate what we were doing. There were also times we begged to perform at events because we were sure of getting sprayed.

In 1996, we did a show at Ogulagha in Delta State and we were paid N80 for mock news performance. In summary, mock news metamorphosed into stand-up comedy, which is more corporate and that started paying more.

Tell us about I Go Save Unusual

I Go Save Unusual debuted in 2009 and it was a huge success. I Go Save Unusual transformed the concept of shows in Edo State and even the South-South of Nigeria, because it paraded different comic and music acts, unlike the normal one musician and lots of upcoming acts event. I Go Save Unusual debuted with the best of Nigerian comic and music acts like Ali Baba, I Go Dye, Basketmouth, Gordons, Klint The Drunk, Timaya, MI, AY and more. We did the show targeting 2,500 people, but we ended up having over 4,000 people to entertain. The show went smoothly with a very perfect timing starting at 11pm and ending around 2:30am. The second edition in 2010 was even bigger and better. Although finance was the problem then as I was doing all with my hard earned savings, which is always not enough, because to achieve a classy event it will cost up to N13m or more. We needed to step up the 2nd edition from the debut and I had no sponsor to achieve all I wanted. The 2011 edition will, by God's grace, be class redefined as I'll be bringing in comedians from the United Kingdom and South Africa.

Are you saying nobody supported you at all?

Sure, I got individual support. In 1999, Kelvin Ebviewere of Global Media supported me financially; my colleagues also did with their presence and performance, which I got on a platter of gold; my state brother, Ayiri Emami a.k.a. Bash Oloye of 911 entertainment gave me his sound equipment valued at N1.5m for free. Edo State government has not really done anything regarding entertainment generally but I know the government will with time because they are really handling a lot of projects almost at the same time in the state especially roads constructions and rehabilitations. However, I also want the governor, whom I know loves entertainment to finance entertainment a little bit as we cannot do it all alone. If individuals can support, the state should, as I Go Save Unusual also provides a platform to educate the mammoth crowd positively against social vices, because a very happy heart learns faster.

You have a new song single titled 'Confession' with an excellent video; do you intend to go into music fully?

Well that song was a remix of P-Square's song titled 'Story' I only changed the lyrics to bring about laughter. I don't think I am a good musician except I am trained to become one because the song I did was filled with me singing off key. My dream is far from being a musician. I shot the video in Austria and Spain. Its main aim was just to make people laugh.

With the stiff competition in the industry, what distinguishes you from other comedians?

I Go Save is a brand and as a brand, the only thing that distinguishes you from others is the way you do the common things uncommonly well; the way you package your jokes and the way you present yourself. For example, I deliver my jokes with a lot of energy and I stress on the things I talk about on stage. If I have three persons involved in a particular joke, I try to portray and demonstrate the three persons in such a way the audience would feel they are actually seeing the three on stage. I display a lot of energy and I do a lot of description on stage. I deliver my jokes depending on the kind of event or audience I find myself.

What is the highest height of your career so far?

In regards to this, everything counts because my career has been a chain of reactions and actions to many things and they all contributed to what I am today. Everything that has happened in the past, present and future are all highlights in one way. If I have to name a few - performing on same stage with Joe, Akon, Busta Rhymes and performing all over Europe and the UK. The double success of my annual shows I Go Save Unusual was top up.

What's the lowest point of your career?

Your ability to come back when you fail is always important in life because that same cause of failure will be noted and taken care of. I see everything as trials, challenges and a call to fight on; I don't see these as lows because I now know how to handle them.

Maybe I am but I will never tell and don't even push further because I won't tell.

Guess you have achieved a lot in your career; is there anything left for you to accomplish?

Accomplishment can be traced to success in doing or completing something. I still have a lot to accomplish in my career; I have not achieved 90 percent of my target. I am yet to own my personal 24-hour comedy satellite television station, I haven't had Katt Williams, Chris Rock and Eddie Murphy perform at my own comedy show, I've had over 20,000 people at my Otas I Go Save 100% show and most of all I am yet to make money.

What is the most important thing in life that you can't do without?

I don't attach a lot value to visible possessions. One fact I believe in is the mind, which keeps me going in good or bad times. So my greatest possession is my mind and I can't trade it for anything.

If you weren't a comedian, what would you have been?

I would have been a footballer.