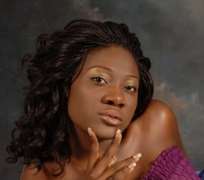 ''Remember some months ago when Mercy Johnson went on the Europe tour and she came back to say that she was not paid all that was due to her and was rescued by well meaning Nigerian from hunger? ok now the gist is that, she actually was not rescued by any well meaning Nigerian, she actually stole the money ($ 4000) from the young man that hosted her Isaac Izoya, and cried foul before he disgraced her in public. when he confronted her about it, she only agreed to taking $ 2000, which she claimed was for her ticket back home. Well the thing now is that she is denying the whole thing saying that some people are out to get her but God is watching them. who do we believe now?''

I contacted mercy johnson on sunday january 11,2009 and this is her response''i dont know who is out to ruin me but i can assure you that this story is a figment of someones imagination,isaac and i spoke today,he has heard of this story and is very upset about it because there is no iota of truth in it.whoever is doing this will not succeed and they should remember that God watches over his own,my hands are clean so they can go on with their tales,isaac and i know the truth''.

This actress is saying she didnt take this money so her accusers should come out of hiding and bow their heads in shame!