SINGLE TENURE, NOT MY IDEA - JONATHAN 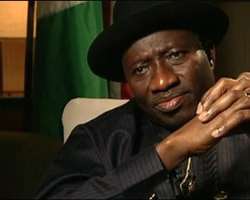 HARASSED on all sides over his plan to send a bill to the Parliament seeking the extension of the tenures of the President and governors, President Goodluck Jonathan on Thursday denied being the author of the idea.

Jonathan said it had been conceived by all the major political parties, apart from the Action Congress of Nigeria.

A statement by his Special Adviser on Media and Publicity, Dr. Reuben Abati, on Monday had said that the President would send a bill to the National Assembly to ask for the amendment of the section of the constitution that provides a maximum of two terms for the President and governors.

But no sooner was the announcement made than it was greeted by criticisms from the opposition political parties, groups and commentators on social networking sites. The critics accused Jonathan of plotting to extend his tenure by subterfuge, adding that tenure elongation was the least of all the myriad of problems confronting the country.

At the meeting the President strove to fend off these criticisms, offering explanations on how the idea came about.

'I felt personally insulted whenever I travelled abroad to hold meetings and people came to make issues as if it was a stolen mandate.

'I used to tell people around me that…if I had the opportunity to oversee elections, elections must be credible so that people would accept us anywhere.

'Because of those challenges, the late President (Umaru Yar'Adua) set up the Justice (Muhammadu) Uwais committee to look into electoral reforms. He also asked all the parties to come together and form a team, so that all the parties would submit a common position.

'And he asked me, then the Vice-President, to chair the inter-party committee to come up with a common memorandum for the Justice Uwais Committee. I chaired that.

'We invited all the parties that formed the government and they participated. Only ACN did not participate. To be fair to them, the other parties attended and we spent almost three weeks or a month. The report is there.

'One of the things raised, discussed and accepted was that a single tenure option may reduce some of these acrimonies.'

The President said it was wrong to assume that he conceptualised the idea after he had won the last presidential election.

He assured the party that there was no way he would want to ask for a major constitutional amendment without consulting with the party, governors and members of the National Assembly.

The President said he was aware that there was no way such an amendment could scale the hurdles if he did not carry the governors along.

'I will consult with the governors because constitutional amendments (must) involve the states and if they are not on the same page with you, there is no way an amendment can easily sail through,' he added.

The President promised to engage in further consultations before presenting a bill on the issue to the National Assembly, adding that he was yet to make up his mind on whether the single term should be six or more years.

He said the proposed amendment had nothing to do with the four year mandate that Nigerians had given him and his deputy, Vice President Namadi Sambo, who was also at the meeting.

He said he decided that a statement be issued on the proposed amendment when he learnt that some people were already holding meetings and insinuating that he wanted to elongate his tenure.

On party discipline, the President asked the PDP leadership to enforce discipline. He added that he was aware that some senior members of the party were already working with the opposition in some states in order to truncate the victory of the governors elected on the platform of the party.

While calling on governors and other public officers to perform to the expectations of the electorate, the President warned that Nigerians could reject the party in 2015 if they (the governors) refuse to perform.

He also said he had fulfilled his promise to appoint female ministers, adding that by appointing females as ministers of finance and petroleum, he had given women more than they asked for.