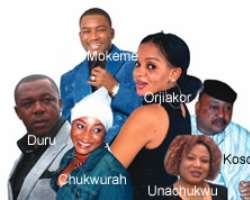 For the booming Nigerian movie industry, the third-largest in the world, the key to success is in the hands of small children with lightning bolts shooting from their palms.

Or the superimposed image of a dog spirit crudely rising from the body of a possessed witch, as in the Nollywood film End of the Wicked. Or, in the same film, demon people morphing into a variety of animals by way of an exceedingly hokey special effect.

These clips can be difficult to watch in all their sensational, ultra-low-budget crudeness. But as shown in the Canadian documentary Nollywood Babylon, now playing at the Sundance Film Festival, getting caught up in this kind of aesthetic judgment is exactly why Nigerian films aren't meant for a wider global audience.

Beyond the thunderbolts and cheap effects, the films are a product not only of Nigerian storytelling traditions, but also a much larger cultural, social and economic shift taking place in the country and beyond. They create a running dialogue and visuals for the millions upon millions struggling to make it in the teeming megalopolis of Lagos, if not other African cities and beyond.

As writer and film historian Onookome Okome says in the documentary, "The one thing that makes Nollywood thick [with fans] is that it's able to touch base with the local poor people who aspire to become rich. So the aspirations of this community of sufferers is something that Nollywood identifies with. It speaks to them directly."

The films have "storylines and themes that an urban African can relate to," says Ben Addelman, who co-directed Nollywood Babylon with Samir Mallal. The two previously made the well-received documentaries Discordia and Bombay Calling.

"A typical Nollywood story would be somebody coming from the village, either a man or a woman. They experience disorientation in the city - the big bad city. And they usually turn to some type of traditional African witchcraft or ritual type of solution, in order to make some sense of why they are poor and some people are rich. They are then always punished for that, and often redeemed in the church," Addelman says.

Nollywood films aren't intended for hushed cinemas. City theatres and even travelling cinemas venturing from village to village died with the violence and economic decline of Nigeria in the 1970s and 80s. Street merchants who sold blank VHS tapes started to put cheap, homegrown films on the tapes in order to attract more customers. A new market quickly exploded in what is now a huge array of cheap DVDs sold in market stalls and on the street. They are a constant in the daily life of Lagos.

"It's like cultural wallpaper. If you go into anyone's house, any restaurant, hotel lobby, there's a Nollywood film playing in the corner," Addelman says.

"And on the street too. You'll drive around Lagos, and in many cases, it's all dark except for the light of the TVs," Mallal adds.

Lagos filmmakers work on a constant churn, one film after another, with bare-bones budgets of $10,000 to $20,000. The few thousand or so they make immediately goes toward financing the next film. Even one of Nollywood's most popular directors, Lancelot Idowu, who has made more than 150 films despite being only in his mid-30s, seems almost to will his films into being through a mix of his own hyperactive energy and communal prayer before a shoot.

"They're all shot on location in Lagos. So in that sense, they are almost like documentaries," Mallal says. "When I first started watching these films, they were hard to watch. A lot of talking. But when you go and learn about why they make films like that, it's not purely a question of budgets. It's also a question of the way they want to tell stories.

"As Lancelot [the Nigerian director] says, he's coming from an oral storytelling tradition and wants to let [audiences] imagine what the imagery is going to be that's associated with that dialogue - as opposed to a Western paradigm of filmmaking, which is to create that impression for you."

But for those films laced with crude special effects, their popularity has been the depiction of traditional superstitions and beliefs. Some films, for instance, show cultish rituals allowing the evil to make money at the expense of others. Others depict the battle of good over evil, with levitating dog spirits and all. Then, of course, there are the vast number of dramas and comedies, typically dialogue-heavy and true to themes of redemption.

"The poorer people get and the less hopeful they are, the more they wish for that extraordinary power that will take them out of doldrums, out of penury," Nigerian poet and writer Odia Ofeimun says in the documentary. Films perform that function, but so does the church, he says. Increasingly, the message of the huge growth of evangelical mega-churches in Nigeria and the messages of Nollywood films are the same.

Ofeimun describes a circular relationship between the two.

Because socio-economic problems are still everywhere in Nigeria, and despite the promise of the church, religion is not actually improving conditions, he argues. Instead, like films, churches are just giving temporary relief. "They are therapeutic agencies, not religious or moral in intent," he says.

Yet since such a large portion of the population is turning to churches, Ofeimun says filmmakers have to show stories of religious redemption, otherwise they "will be throwing away the source of their income."