OVER 50,000 GHANA/NIGERIA Movies Pirated From U.S.A To Ghana 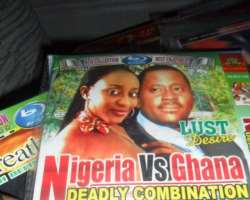 The film producers Association of Ghana (FIPAG) are doing their best to frustrate piracy since they have made it known to the public that they cannot kill piracy. They are fully aware that, the more you plan to kill it the more the companies involve find different strategies to work their own way out.

They have also made it known to us that they will hold an urgent meeting soon to warn anyone who has pirated goods on sale.

The warning is to charge them to desist from selling pirated goods else, they will be arrested and prosecuted by the end of this month.

Meanwhile, some individual members are going round to cease some goods that they think were not produced on the market but are being sold.

They have also put some measures in place that will help them collaborate with the harbors in the country, so all pirated good that will be imported into the country can be ceased.

Although they have not signed any official deal with Tema harbor, the film producers and representatives from GAPI were invited by officials of the harbors to witness over 50,000 GHANA NIGERIA movies pirated from the U.S.A to Ghana.

Unfortunately the one who pirated the goods was nowhere to be found. But when Attractive (Mustapha Ayinde Inusah) Spoke with the producers whose works were found among the ceased goods at the harbor. Although he could not contact the C.E.O of executive image whose movies were part of the pirated goods at Tema we spoke with Kwame Boadu who happens to be his brother. He revealed to us that they know nothing about the pirated goods, so the owner should be arrested

As it stands now, the goods are at the port with no popular name attached to it whiles the owner is still at large.