From Me to Tonto Dike 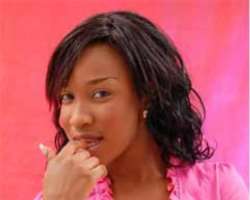 Before I write this few phrases to the Nollywood star, I want to say a very big 'I am impressed" to the Naijarules family for intelligently dissecting the Contemporary vrs Rural article. I was very inspired by people like Takestyle, Sidney, Angela, Sola and a few others. That site and Nollywoodgists .com are a must go for every Nollywood practitioner who wants to be good at what he or she does. Honest criticisms albeit there are a biased few:)

Now to the star if the week Tonto Dike. Why is she deserving of an entire writers time? because apart from the fact that she is a bad actress, she has just added ignorance to her list of attributes. That recent interview she granted was a joke.

Dear Tonto,
In all honesty, marketers may consistently put you in their movies and that will by all means make you assume that you are a great thespian. Unfortunately, it has already been established that these marketers and producers really know nothing, thus their marketing strategies are not ones that speak for the viewers of Nollywood. Frankly speaking, the only reason why people MAY watch your movies is to get hard down there. Why? from one woman the other, you are very pretty, not because you stuck a finger in your lips and groped the delightful V between your legs for a picture pose but because God made you very beautiful and hey, who no like pretty gals huh?

To say then that there is no such thing as over-dramatization is as ignorant as statements come There is such a thing as over reacting and that is all you do. In your acting arc, there are no gray areas. You are either talking softly or you are screaming. Either being moody or over excited. You never bring any complexity to your characters like Omotola can do as she did in working for love or as Queen Nwokoye did for Speak the word.

Acting is not about polishing your face and looking fine for the camera so that you can feel good outside, it is to BECOME a selfless, adopted image of another. It takes intelligence. Acting is not as black and white as we see it, it involves many dimensions. As a human being is not predictable and can be influenced by outside forces and inward forces, so must a character be approached. Complex, interesting, like Chioma Chukwuka in Dead in Faith. She made us laugh, cry, get mad, get happy; you on the other hand concentrate too much on your looks and accent. How do you expect to become your character when your mind is working in over-drive with looks and accent? The few seconds of intermission you have on set should be used to rehearse with your fellow actors, not grope through shades of make-up, lip gloss, dog chains, horse hair weaves, South African flag color clothes, plastic and rubber jewelry and garden of eden assortments in your hair.

And what do you mean by that is how you have always spoken? Child please. Tell me something else because that is a lie. That is not how you spoke in Tea or Coffee? neither did you speak with that phony accent in blindfolded men.

Sister o mine.... do us a favor, do our seven dollars per movie a favor and take some acting classes. Not for you, as you have said you do not see the need but for US, your viewers. We spend dish washing paycheck on these movies. Please. Stop with the accent. Remember that Di caprio had to do an African accent for blood diamond, Forest did that for Last King od Scotland. There is a unique accent for everyone depending on where they are from. If you start with an American o British accent, you really think they will come for you to play an African woman with an African accent? No, they have enough of those here.

You say you want to put up a motherless babies home? Wait, is that the new fashion for you actors? There are numerous orphanages, how about you just support one? It doesn't even have to be in Nigeria. Ghana, Kenya, Sierra Leone, Dafur (they will need your help a lot).

I am assuming you just blindly follow anything and everything that people are doing. Don't you have your own dreams and ambitions? If the crowd goes to jump into a lake, will you jump with them?

New word for the rest of your life INDEPENDENCE. That means a multitude of things. Like being confident in who you were born as and in who you have always been.

Hope this letter find you hail and hearty and due for change. Yes You Can!!