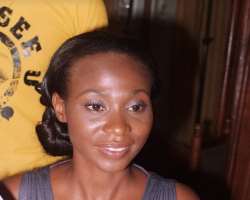 Nse Ikpe Etim is one of the new faces in the movie industry. The sky seems to be the limit with the way she handles her roles in movies. This, she has achieved within a short while in the industry. In this interview with Adunola Fasuyi she speaks on several issues.

Is it true that your journey into Nollywood was not planned or deliberate?

It is true that my foray into the industry was not planned or deliberate. I like to say it just happened. I was handed the 'Reloaded' script by Emem Isong and that has been the journey thus far. I did not see myself as an actress, even when she said I had no confidence, I chose not to prove anyone wrong, well, until now. I still get scared.

You are regarded as one of the best actresses in Nollywood right now, how does that make you feel?

That is a lot of honour to be bestowed on a relatively new comer. I am honoured to be put on the same pedestal as the amazing actors and actresses that Nollywood has produced.

It has been said that you view acting as a part time thing and that is why you are hardly seen around actors and actresses or events relating to the industry?

That's not a fair thing to say. I live in Abuja and it is quite tough to attend all the functions here in Lagos. I do try to attend the ones that take place whenever I am in town. And for the record, it is not part time for me.

Aside acting in a couple of movies and the fact that you are from Akwa Ibom, what do you think is another interesting detail about you?

I am a Nigerian. I think that sounds a lot better than claiming a state. I have been told that I have a sense of humour, I love to cook, write in my spare time, read a lot and lay in my couch. That's it really.

Why do you think a lot of people regard you as a very sexy actress, despite having the likes of Omotola, Genevieve, Omoni Oboli and others around?

Sexy? That's not what I see myself as. I am a regular woman. Though, not the girl next door. I honestly don't think of myself in that light. But if people see me so, well they know what they saw before concluding.

Your innocent and girlish look is said to be one of your strong points, do you share the belief?

That means you have not looked straight into my eyes. Is that not where they say innocence lies? I don't share in the belief, but I dare say that I do not see what people see.

As somebody who has been around for only a few years and your stock is so high in the industry, what or who would you say is the motivating factor, aside God?

I did not see that coming. Well, since I always give glory to God I will say that it has been the grace of God and the fact that I have been able to marry professionalism with my God-given talent. Discipline is key and also, the talents I have been opportuned to work with have brought a lot to the table for my rise and I am truly thankful for it.

It has been observed that you feel most comfortable working with 'your' people, like Desmond Elliot, Emem Isong, Ini Edo, what would you say to that?

Why do you think you are tailor-made for the romantic parts?

I do not think I am tailor-made for any part in particular, it's just that I have been given romantic parts to play, but I have played other characters. I am a prolific actress and can act any script or role given to me. I am not a stereotype kind of actress. Basically, I think producers give you what they deem fit for your character.

Are you as romantic in real life as you are portrayed in the movies, especially since that is what has got everybody talking about you and such movies?

I can be romantic. I believe in happy stories but this does not mean that I live in a surreal world. I also think that the reason people talk is because the character might have been portrayed the way the director wanted it interpreted.

If acting is not really what you would have liked to do as insinuated, what career then tickles your fancy enough that you could have gone into?

After finding succour in acting, I think I am happy where I am. I love the fact that I cook, which is a passion I cannot give up for anything.

Are you still looking forward to coming back to Lagos having lived in Abuja for a long time?

I am looking forward to moving. I will be closer to my mother and won't be accused of not attending functions like you have.

How are you looking forward to featuring in Kunle Afolayan's movie that would be coming up soon? Are you kind of scared, excited or anxious of what to come?

As a nervous actress, I am scared but as an actress who recognises excellence, I am excited. I am just thankful for all the opportunities.

Since you like cooking that much, have you ever thought about making it professional?

By professional do you mean if I earn from my hobby? Yes I do and do hope to get it way bigger than it is.

When you were much younger, what were the dreams of what you wanted to be?

I honestly don't know what I wanted to become. I admired actresses (Sophia Loren and Gina Lollobrigida) because it was what I saw on TV, but for me, growing up was paramount and so having to follow my dad's dream of being a doctor was far-fetched.

Did you follow those dreams through your school days?

I think by the time I was eligible to write JAMB, I knew I wanted to study Theater Arts, which is why I deliberately chucked the first form in front of the post office, walked into CBN and lied to my father's friend that mum could not buy a form for me. Having just lost my father, I whipped up sentiments, bought a new form and filled University of Calabar , Theatre Arts. Well, look where it got me?

Were you one of the few that had a swell childhood? Or were you too much of a princess that you were not allowed to play with other children?

I had a fun filled childhood, even when friends are chosen for you; you must make the best out of it. Looking back, I could not have asked for a different or better childhood.

Did you ever play pranks on mates at that time?

Playing pranks was too much fun. And I still have not stopped, so Iguessed I carried with me something from way back.