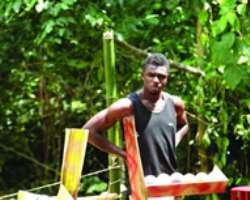 Prior to the proliferation of reality TV shows in Nigeria, one programme had attracted the attention of television viewers; it's the Gulder Ultimate Search (GUS). Today, it prides itself as arguably the first and best local-content reality show in the country.

The beginning
Sponsored and organized by Nigerian Breweries Plc, makers of Gulder beer, the Gulder Ultimate Search kicked off in 2004 at Snake Island in Lagos State with 10 contestants. The following year, it moved to Obudu Hills in Cross River State. NIFOR in Benin, Edo State, played host to the third edition in 2006. The next edition was held in 2007 at the famous Sheri Hills in Jos, Plateau State while Awgu Hills in Enugu State was host to the 5th edition in 2008. In 2009, GUS brought out the tourism potentials of Omodo forest in Osun State. Last year, the show was held at Omo Forest Reserve, in an isolated village known as J4, somewhere within the Ijebu East Local Government Area of Ogun State.

Of course, Nigerian Breweries came up with the celebrity version of the Gulder Ultimate Search in May 2010. The show was held at the La Campaigne Tropicana Resort, Ajah, Lagos. Dark complexioned actor, Emeka Ike emerged winner of the competition after beating all other celebrity contestants.

Nationwide auditions
Before being selected to participate in the competition, potential contestants are taken through painstaking physical, mental and medical tests. Auditions are carried out in regions across the country after which the contestants are thinned down to 30. The final 30 are then further divided into three groups before being broken down into the final 10 that would compete for the grand prize.

Jungle experience
Though, the plot and location for each edition vary, the objective of the show largely remains the same. Contestants undergo a grueling 21-day experience in a dangerous jungle where deadly wild animals such as snakes, buffalos, hyenas and elephants are found, and yet performing various tasks assigned to them while seeking a hidden 'treasure'. The tasks are specially designed to test the physical and mental strength as well as the survival instincts of the contestants.

Beyond adventure
As the series progresses, the contestants are gradually trimmed down through a series of stringent tests and tasks. The eventual winner emerges from the set of finalists after discovering the hidden treasure in the jungle. However, beyond the adventure and excitement the show generates, it also embodies the qualities of strength, resilience, and persistence among the contestants.

The anchor
This year, GUS is bound to generate more excitement as a huge number of people, about 7000, are expected to register for the competition. And talking about the anchor man, the organizer has not indicated its desire to change the winning team. Checks by Blockbuster reveal that in the tradition of allowing a top actor to co-ordinate activities in camp, Nollywood star, Bob Manuel Udokwu, who anchored last year's edition, has been given the nod to also do the job this time round. He assumed the position four years ago after taking over from his colleague, Chidi Mokeme, who was dropped after anchoring the debut.

The audience
The Gulder Ultimate Search enjoys extensive television coverage both locally and internationally. From the inception, the reality show was an instant hit with the TV viewers. Apparently, the novelty of GUS coupled with the fact that reality shows were few and far between as at the time of it came had worked in its favour. Apart from being screened on different terrestrial television channels all over the country, the show is also available on cable platforms like DStv.

From ultimate man to champion
Right from the maiden edition, winners of Gulder Ultimate Search have been winning big. And year after year, Nigerian Breweries has been increasing the prizes. Beginning with N3 million in 2004, the prize till last year had notched up to a whopping N7 million with additional N.5m as wardrobe allowance. Except in 2010 when the winner was tagged Ultimate Champion, winners of the previous editions were dubbed Ultimate Man.

Ezeugo Egwuagu was the first person to win the Gulder Ultimate Search's big prize when it debuted in 2004. He carted away N3 million. Luncan Chambliss won N5 million in the 2nd edition. But then by the third edition, a brand new Ford Explorer SUV had been added to the prize. So, apart from the N5 million won by Hector Joberteh that year, he also drove away a Ford Explorer jeep. GUS 4 produced Dominic Mudabai, who smiled home with N5 million plus a Ford Explorer and N.5 million wardrobe allowance.

He also had N.5 million as his wardrobe allowance. Just like Nwachukwu, Uche Nwaezeapu as the ultimate man of GUS 6 also won N7 million and got N.5 million as wardrobe allowance apart from cruising away in a sleek Ford Explorer. Equally, Kunle Oluwaremi, who among 12 contestants emerged the 'Ultimate Champion' of last year's edition, became N7 million richer, had his wardrobe augmented with N.5 million allowance as well as becoming a proud owner of a brand new Ford Explorer jeep. However, it was not until the 4th edition of Gulder Ultimate Search in 2007 that a prize was introduced for the Last Girl Standing.

GUS 2011
As the 8th edition approaches, the Gulder Ultimate Search seems to be waxing stronger and stronger. The show appears not to have lost its shine. The audiences are also not tired of watching it. In fact, there is excitement in the air for this year's edition even as the organizers have squealed to television viewers that they should expect lots of surprises.

Mr. Edem Vindah, Media & Public Affairs Manager, Nigerian Breweries Plc, said: 'Ever since Gulder Ultimate Search started in 2004, we have always endeavoured to raise the bar in every subsequent edition. Don't forget, Gulder Ultimate Search pioneered television reality show in Nigeria and as the programme has been acclaimed as the best in Africa and one of the best in the world, we have to continuously shift the bar and make it the ultimate in entertainment reality programming, coming from the ultimate in beer brand.'