LIVERPOOL CAN CHALLENGE US WARNS ROONEY 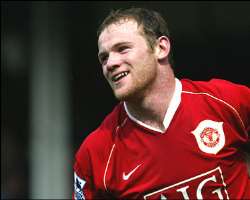 The England striker, who fired a hat-trick for United this week during their tour of the United States, said that Liverpool's summer transfer activity would leave them better equipped to challenge for the title.

'I think they will challenge this time,' Rooney was quoted in British media reports as saying.

'They have made some really good signings, British players, and under Kenny Dalglish I'm sure they will be trying harder than they ever have done, fighting to be up there.

'They will think they have a chance of winning the title next season.'

Rooney also feels that United's cross-town rivals Manchester City will be a more potent force after a strong finish to last season.

'They've obviously got a lot of good players now and they had a big push towards the end of last season,' he said.

'The main ones [challengers to United] will be Chelsea, Arsenal, Liverpool and City. I think one of them will push us as we try to defend our title.'

Rooney, who threatened to leave United last October after accusing the club of lacking ambition, has also been impressed by United's transfer dealings, which have seen the arrival of Ashley Young, David De Gea and Phil Jones.

'There have been a lot of changes this summer and, when you look around the dressing room now, suddenly it's a lot younger place,' he said.

'But the manager is bringing in players who have not won a league title before and they all have that hunger and desire to want to win trophies.'