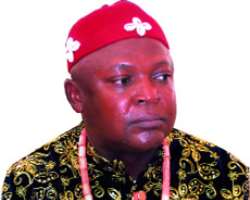 •Akubueze
Religious leaders, key to peace and security in the country

Religious leaders can help to stop the rampage of the Boko Haram in the country. For instance, the Sheiks and the Ulamas are highly respected by the masses in the North. They should be used in solving the problem. If they call the youths that are carrying out these bombs to order, I believe they will stop. Another issue is the involvement of community leaders. I feel that time has come for government to start recognizing community leaders. In every community, we have heads and the government should identify these heads and begin to carry them along. If a community leader realizes that by the virtue of the position he is holding, if something untoward happens in his community, he would be called to give account, he would be up and doing.

Government and the security agencies should be liaising with these community heads. They should always be invited to meetings and in the cause of the meeting should be advised to organize their own vigilant groups since they should be held responsible for any security breach in their communities. If this is done, I strongly believe that the security problems would be addressed because those perpetrating the acts don't come from the moon. They live in the communities. If the religious leaders and community heads are given the mandate and the necessary empowerment, they have the capacity to stop the insurgency. Another thing is what I want to call economic security. Government should try to live up to its responsibilities to the masses some of the causes of insecurity is disconnect between government and the people. When people lose confidence on government, everything untowards would begin to happen.

Government should encourage the provision of jobs. Government should try to restore confidence of the people by addressing their needs. Once a people feels that government is concerned abouttheir welfare, their security and their future, they would try to be on the side of such government and even if a group is planning evil or doing evil, they would not be tolerated in the community and therefore exposed.

The Police should be overhauled
I strongly believe that there is need to overhaul the Nigerian Police. I feel they are ineffective in terms of coping with this magnitude of violence. If government wants the insecurity in the country to be tackled headlong, it should train our police to be professionals. The Police High Command should stop posting them where they would have any tribal affiliation, as that naturally would be hinding their effectiveness.

National Youth Service Corps
It is a fact that those who initiated the programme had the unity and oneness of the country at heart. The programme is a very laudable one but the present situation is trying to make nonsense of the scheme. The aim of the programme is for the graduates to serve their country and not to go and die. My personal view is that the programme should continue on the grounds that government would guarantee the security of the members. In a situation where security can no longer be guaranteed for them, then the programme should be phased out or at best let every corps member serve in his state. Increasing their allowance does not make any meaning when security cannot be guaranteed for them.

So, I want government to think seriously about their security before posting them out to those volatile areas. There is a limit to what a people can endure. We will not continue to tolerate the cutting down of the lives of our youths in their prime even if government is paying one billion naira as compensation. No amount of money can compensate for lost life. So, the question now is, will NYSC be or not? My opinion is if it must be, government must take the issue of their security very serious or let them begin to serve in their geo-political zones because service is service. Where one serve is not important provided you have served.

Devolution of power
I am in support of those calling for the devolution of powers. The power in the hand of Federal Government is too much. In short, Federal Government has turned the states to almajiris and this should not be. The ideal thing is that the states should be feeding the centre. But now, the reverse has become the case. It is because of this abnormality that everybody wants to be at the centre. The centre has become a do-or-die mission. So, I am calling on the National Assembly to begin the process of devolving power. They say that we are practicing federal system of government but what is in practice is autocracy. The centre has turned the components parts to beggars and this has killed creativity. No state government wants to be creative because everything is in the hand of Federal Government.

The states are now contented with going to Abuja at the end of every month to receive allocation and this is affecting the development of the country. The agricultural resources that Michael Okpara, Obafemi Awolowo and Ahmed Bello used to build the three zones in the country can still be revamped but no state is thinking along that line. Groundnut can still grow in Kano.Cocoa can still grow in the West and palm oil in the East. So, I am calling on the present administration to start the process of transferring the country into a true federal state. If this were done, the country would be back to the golden years of the 60's.