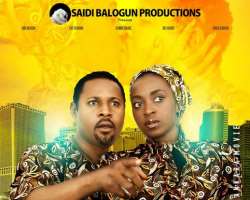 Ajadi (Sunkanmi Omobolanle) is an impulsive young man who works in the same place as his elder brother, Adigun (Saidi Balogun) and from the very first scene of the movie, his tempestuous nature is unleashed on viewers. His incorrigible manner is evident in the manner in which he addresses fellow workers, one of which also snaps at him for ordering her around and even the intervention of the manager does not stop his tantrums that soon earn him a two-week suspension as he accuses the woman of taking sides in the matter.

Storming out of the company, he ensures he has a misunderstanding with at least three people just before he gets home and others the same day. Some of these people include his girlfriend, Shakirat (Yinka Salami) and his friends and it takes the intervention of his brother, Adigun, to calm him. That is how we get introduced to the world of the two brothers.

Struggling to take care of the house, the two work to keep some money in the house. Adigun's fiancée, Sherifat (Kate Henshaw-Nuttal) soon comes into the picture as a doting and dutiful woman in Adigun's life. But the fear of losing one way or another persists as she had been married before but lost her first husband to the ECOMOG expedition in Liberia with a son to show for that union.

In the aftermath of Ajadi's suspension, Adigun goes to beg the chairman of the company to plead on behalf of his erring brother and getting an assurance that Ajadi would be welcomed back to work after two weeks. However, on coming back, Ajadi tells him he is not interested in going back but ready to start his own business immediately, having secured a small loan to start straightaway from his girlfriend.

But the real story begins when the company where Adigun works selects him for a scholarship to the United States as part of an annual programme of the establishment. Confirmed as a beneficiary no doubt, the problem posed has to do with raising enough money to pay for the flight ticket and the search for the money takes him far and wide. As Adigun becomes more desperate, one of Sheri's friends, Adedun (Funke Adesiyan) offers to help him out but with the condition that he must leave his fiancée.

This is unacceptable to him and this is even made worse when he discovers that both Adedun and Aunty (Shafy) are willing to have him as he storms out of the house. But in the end, it is Ajadi whose business is gradually picking up, that comes up with the money for the ticket but the money is actually meant for a wood contract he gets at the time.

The understanding is that Adigun would travel out and then send the money to his younger brother in about two weeks so life can go on for both of them. This is easier said than done and Adigun is unable to fulfill the promise of paying back so Ajadi can in turn make his customers' supply. The consequences of this are dire but it is Ajadi that bears the brunt as he is locked up in a police station by his creditor and only bailed by Adedun after some days. In anger, Ajadi refuses to pick Adigun's calls after his business is ruined and having the feeling that something was amiss, calls Sheri to help him hand the phone over to Ajadi and that is when the younger man, still refusing to speak with his brother, lashes out at his brother with all the bottled-up anger finding a way out.

While shedding tears for the verbal arrows the unfortunate circumstance brings his way, Adigun decides there and then to abandon school for menial jobs in order to be able to raise his brother's money and return to school the following year.

The other colleague who is also chosen as a beneficiary of the scholarship scheme by the company they work for, Francesca Agbabiaka (Ronke Anthony or Oshodi Oke if you like) tries to dissuade him from leaving school as that is the primary task of their coming to the United States of America, all to no avail. With this decision bound to come with its own consequences of course, Adigun's desperation soon takes him to doors he would not have had cause to go to ordinarily.

Back home, all is not the same as Ajadi, whose business is also ruined totally, turns to areas that are not for the law-abiding, ending up as a member of a robbery gang as this unravels the more, setting off a biting conclusion to a tale widely acknowledged to be commendable.

Coming to a critical look at what Eti Keta is, we have heard about the widely reported statement of the movie's producer, Saheed Balogun, who also plays the lead role as Adigun that the Hausa, Igbo and Yoruba are widely used in the movie. I disagree with that because making use of the Hausa language in one scene or a maximum of two is not enough to say it is one of the languages of the movie. Aside Hausa, even Igbo is sparingly spoken with the three-word phrase, the best that could come out of the lone speaker, Shola Kosoko, who plays the role of Ifeoma.

But the real poser that this argument would be based on is if a native speaker of any of the major languages would be able to grasp the story with the occasional subtitling process only for the time the Yoruba language is spoken. Even the title of the movie is arguably defeated when you look at the fact of the matter upon which it is based as the truth about the robbery incident that leads to the death of Adigun is already known to Adedun, her aunt, the aunt's friend and many others yet it is assumed that a third party is yet to share in the secret.

But one of the great walls of disenchantment with the movie as far as I am concerned is the fact that it is evidently too didactic an effort and this goes on to sorely affect its entertaining essence. How, in God's name, can anybody, while speaking to you tell you her name is Ikilo (warning in any kind of translation to the English language) and you would not be curious as to what sort of name that is? That is what happens in one of the scenes when Ajadi goes to the house of one of his girlfriends and a little girl comes out to advise him on grave issues and he doesn't get the drift until later when it is played back.

There is no problem with the acting of Kate Henshaw-Nuttal as she is known to be one of the most trusted when it comes to acting delivery but she falters a bit in this movie especially with her Yoruba very suspicious if you are familiar with the language. But then one of the high points of this movie comes into play with the enactment of the all scenes involving Doris Simeon Ademinokan. She is a shining star as far as this movie is concerned and not even acting the part of a partially crippled but beautiful young woman takes this away.

So if you forgive the producer for all the advert placements that dot the movie without warning, the documentary part involving Saheed and his trip to France to drum support for tourism in Nigeria, Eti Keta, directed by Daniel Ademinokan, remains one of the movies for which you would not bite your finger or be mad at yourself for devoting time to