AN ODE TO MY FRIEND, CHEVY SPARK 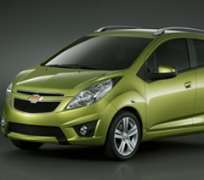 The best way to task a city car is to take it to where it naturally belongs - the city! That is, on the stop-go, turn left, turn right traffic and tight street corner space or parking lot, where only a 'smallie' can be manoeuvred into without the fear of scrapping the paintwork of nearby cars.

But, when a city car excels in its own 'core competences', and goes on to hit the freeway and also impresses its driver there, then it must be taken serious, especially if it is a new product.

Marketed in Nigeria by NMI/Intermotors, a member of the CFAO Auto Division, the new Spark was among the vehicles lined up for a test-drive by GM South Africa; – an adventure which featured motoring journalists from Nigeria, who also drove two different units of the all-new Chevrolet Cruze and the latest version of the captivating Captiva SUV.

It was indeed a challenging exercise, mainly because having been used to driving on the right side of the road in Nigeria, keeping the car steady on the left side and changing the gear with the left hand, would have been like eating spaghetti with Chinese chopsticks for the first time. But, thank God for the smoothness of the new Spark's transmission, the fact that it was not one's first time on South Africa's highway and, of course, the well-paved and maintained Rainbow Country's roads.

Alongside its elder sisters, the Spark left the Storm River Mouth take-off point that Tuesday morning (July 5) with the speedometer set at zero, and by the time the convoy had reached the destination point of Tsitsikamma Falls (where the team had an unforgettable cable slide experience), the Spark had recorded 165 kilometres.

It was not until the vehicles were homeward-bound that yours sincerely got behind the steering, and what a ride! It is doubtful if I have driven a compact car that had so much torque, stability and manoeuvrability as the new Spark. I have never given a slight tap on the acceleration pedal and got so much power, especially within a small take-off distance and during a highway cruise.

The speed limit on the expressway in South Africa is 120 kilometres, but twice, Mike Ochonma of Businessday, who paired with me during the test-drive, had to perform the thoughtful duty of drawing my attention to the fact that the speedometer pin was pointing towards 140, as the car kept a wide, rear-ward distance between her and her siblings.

Problem was that no sooner did we slow down to remain within the legally permitted speed limit, than the pin started moving past the 120 mark again, but the involuntary urge to cross the limit again was promptly defied. 'Involuntary', because unless you cat a glance on the speedometer, you wont realise how fast it is moving. Reason: The engine is noiseless and vibration was almost totally absent. Ditto for noise.

By the time the car was being effortlessly guided back to a small space in a parking lot at Storm River, the total distance covered on the homeward drive was 189 (a total of 354 kms). Not a few of those who observed my 'friend's' performance on the road, including Rasheed Bisiriyu (Punch), Theodore Opara (Vanguard) and Olumuyiwa Lucas (Tell) hailed the car for giving more than a good account of itself on the road. Also notable was the car's well trimmed, comfortable interior. It was with deep sense of nostalgia that I alighted from the Spark and handed the key to the team leaders - wishing I could have my friend follow me home.

However, neither the Managing Director of CFAO Automotive Division, Mr James Duncan, who was in South Africa for meetings with GM South Africa management, and officials of the auto maker, including the Communications Manager, Denise van Huyssteen, appeared surprised at the impressive drive of the car. Each wore an I-think-I-told-you look.

Truly, the day before the test-drive, both the Managing Director of GMSA, Edgar Lourenncon, and van Huyssteen, had formally introduced the car and other new Chevvys likely to hit the Nigerian market soon, to the guests. The guests were informed: 'For the development of the new Chevrolet Spark, the design team at the General Motors global vehicle development centre for small cars, based in Incheon, Korea, was tasked with producing a vehicle that would offer best-in-segment standards in quality, performance and safety'.

As a true global offering from GM, the new Spark is destined for sale in over 150 markets around the world, including Nigeria where it is already in NMI/Intermotors' showrooms.

During the development programme for this entirely new model, the Spark design and engineering team made extensive use of General Motors' Virtual Vehicle Assessment Process, a powerful development tool.

This advanced virtual system analyses the entire manufacturing process of a new GM vehicle through a process of numerous computer simulations to identify possible defects, in advance of the move from the design stage into production.

To support the objective of meeting the highest quality and performance expectations of a sophisticated customer base the Spark was exposed to a range of static and dynamic tests at its home base and in a number of its target markets. In this global test programme development, prototypes of the new GM city car covered more than one million kilometres in intensive durability tests, extreme weather tests, and a full range of safety tests.

With the objective of exceeding customer expectations from day one the Spark design team exposed early production samples of the new Spark to the critical eye of a group of potential customers. During this quality clinic participants were asked to evaluate some 200 items that impact on customers' initial quality perception. Members of the engineering team noted the feedback from the group to ensure that niggling quality issues would be resolved prior to the general release of the vehicle.

Prior to this consumer quality clinic GM selected a group of employees to put the new Spark through its paces in a real world driving experience. Fifty examples of the new vehicle were allocated to employees to use in their every day vehicle usage over a period of 90 days and offer their suggestions for quality improvements. Both the employee and customer evaluations provided valuable insight into the initial quality perceptions of the new Spark as it came off the production line.