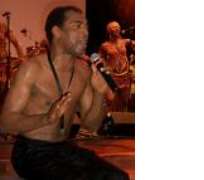 Afrobeat King, Femi Anikulapo-Kuti, has been admitted in a Lagos hospital for what his doctor diagnosed as acute exhaustion occasioned by his extensive 10 weeks tour of Europe and America that ended mid December 2008.

He reportedly checked into the hospital late Saturday January 3, after initially refusing to abide by the doctor's directive that he should cancel all Christmas performance engagements and take a bed rest. His elder sister, Yeni Anikulapo-Kuti, told Showtime in a telephone interview on January 5, that her brother is responding to treatment.

“He was admitted in the hospital on Saturday, January 4, 2008 and he is responding well to treatment. We are also waiting for the result of further tests that has been carried out on him,” Yeni disclosed.