FUNKE AKINDELE RETURNS IN SEPTEMBER WITH ‘THE RETURN OF JENIFA’ 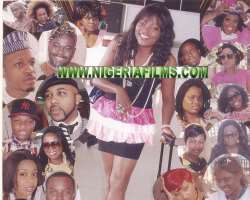 When the first of the Jenifa movies 'Jenifa' was released in 2009, it was like a breath of fresh air in Nollywood and though the cinema
culture was not as pronounced then as it is now, a lot of people were receptive to the movie locally and internationally and official and
unofficial records reveal that the movie sold over 8million copies.

While some speculated, that Funke Akindele was only lucky with 'Jenifa', she reproduced the success in 'Omo Ghetto', the hilarious movie that portrayed Jenifa as 'Omo Olomo' born by 'Baba oni baba'.

Convinced that Funke Akindele is good at what she does, movie lovers in and out of Nigeria cannot wait for the arrival of 'The Return of
Jenifa', the latest of the Jenifa movies. After a successful shoot in and out of the country, 'The Return of Jenifa' is all set to be premiered at the Muscon centre in Lagos come September 23, 2011 and will be arriving in cinemas across the country on that day. It has also confirmed that 'The Return of Jenifa' will be premiered in United States and United Kingdom.

An enthralling and exciting movie, 'The Return of Jenifa' has already attracted the support of big wig brands like Lagos State government,
Globacom; an African telecommunication industry and so many other cooperate bodies are in talks with the producer and management of the movie.

Directed by DJ Tee of DJ Tee Films 'The Return of Jenifa' resolves the suspense that enveloped Jenifa's exploits. She registered to participate in a dancing competition but when asked to undergo an HIV test as requirement for the competition, Jenifa fled unsure of her
status. There is a blatant silence as to the repercussion of Jenifa's excesses, especially her HIV status.

Afraid of her status Jenifa becomes her own antagonist by being evasive. She withdrew from the society she once ruled and relocated
back to her village. She does not stop being her crazy self while in the village but in the end, she learns life is not all about being a
'Gbogbo Bigs Girls'.