The Nigerian Movie Industry In 2008 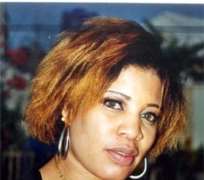 •Star actress, Oby Gold Edozien, hosted friends at her Surulere residence on Sunday 6, January. The party, which paraded an array of stars, was organised to surprise Oby's immediate elder sister, Comfort, who had left Nigeria since 1999. Those that graced the party include 1996 Dream Team Olympics goalkeeper, Dosu Joseph, Steph Nora Falana, Chidi Mokeme and Emmanuel Adigwe (D'lectura) who was the compere.

•The Movie Reporters Guild of Nigeria (MORGON), appointed the CEO of Atlantic Overseas, Mr. Andrien Gbinigie, as its life patron on Sunday, 17 February at the Niteshift Coliseum, Opebi Ikeja. The event was attended by the crème-de-la-crème of Nollywood.

•Actress Monalisa Chinda, who got married to events manager, Dejo Richards, was delivered of a baby girl in late February.

•Controversial gospel music singer, Sammy Okposo, denied rumours that he was slap by star actress, Stella Damasus, over a misunderstanding concerning their relationship.

•Upcoming actresses, Eniola Badmus (Wule Bantu) and Kemi Afolabi had a face-off over missing jewelry that belongs to Kemi. The show of shame was at a location in Ikorodu sometime in March.

•Uche Jombo, an actress, who has for many years impressed her fans with her delivery of roles goofed on Sunday, 6 April, when she was the host of Soundcity (a TV music programme).

•The Video Rental Operators Association of Nigeria (VROAN), held a free and fair election for new executives on Tuesday, 22 April. Hon. Kazeem Olatunbosun (Boe) was re-elected as the National President.

•Wife of popular comedian, Bright Ekpocha a.k.a. Basketmouth was delivered of a baby boy in the second week of May.

•Nollywood stars and entertainers stormed Club Unique, Ogundana Street, off Allen Avenue, to watch the final of UEFA champions league between Chelsea FC and Manchester United of England On Saturday 28 June; and the upscale rendezvous held an award night for movie stars.

•Yoruba actress, Toyin Adegbola a.k.a Asewo to re Mecca, was enmeshed in a public blackmail by a self-styled son of the Ooni of Ife, Oba Okunade Sijuwade.