Ministers: 8 More Nominees Sent To Senate As Senators Approve Another 8 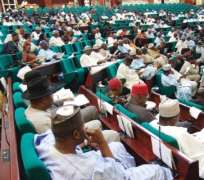 The senate also on Thursday confirmed eight ministerial nominees bringing the number of confirmed ministers to 32.

However, the President of the Senate announced the withdrawal of Dr. Obadiah Ando (Taraba) from the nomination list. He did not advance any reason. It was nonetheless learnt that the withdrawal of the erstwhile Minister of Water Resources may not be unconnected with the objection of the 3 Taraba state senators to his choice as the State nominee by the President.

Also the Senate has finally concluded the constitution of its body of principal officers with the announcement of Senator Abdul Ningi (Bauchi) as the Deputy Senate Majority leader thus ending the associated crises ignited by the North East Senate caucus when they rejected the position. Ningi was a majority leader in the House of Representatives between 2003 and 2007.

Responding to questions during the screening, Amb. Ashiru, declared that not only is Nigeria deserving of a permanent seat at the United Nations Security Council, but also must of current reality change her foreign policy focus from Africa as its centre piece to Investment Drive adding that the country has paid her dues.

He also advised for an urgent convening of a conference on Foreign Policy where a holistic review of the policy would be addressed to chart a new course that would reflect the current realities in the global system. The last conference he said was held in 1986 in Kuru, Jos.

“The participants must be drawn from all the players, including the National Assembly, Academia and all stakeholders involved in foreign policy formulation.

“The afro centric policy currently practiced should not be totally jettisoned it should be re-modified to reduce poverty, support government effort in infrastructural development.

“The issue of taking our troops to other countries and they just say thank you is unacceptable, we must tie those assistance with reciprocal benefits.

“We now have a slight shift because we must use our foreign policy initiative to enhance our economy, create jobs, and support government in infrastructural development, energy, science and technology, agricultural development among so many other development oriented issues. We must begin to use our foreign policy to combat terrorism, in fact the emphasis must change now, and Ambassadors must be at the vanguard for the nation’s investment drive,” he stated.

He added that Nigeria has over the years spearheaded the campaign against colonialism, apartheid more than any other country in Africa stressing that the Jonathan administration will take the lead in the campaign.

The security agencies he said should ensure that the country’s borders are secured against the importation of illicit arms even as he advocated engaging the country’s neighbours in that regard. He further added that there is no excuse why we should issue visas to investors.

On his part former Minister of state for Defence, Mike Onolememen lamented that the housing situation in the country is near a crisis situation. He added that since the creation of the FDA 43 years ago only 43,000 houses have been built. “Moreover, the UN probe shows a house deficit in Nigeria of up to 17 million. Which means that we need to build one million houses every year to deal with it,” he said.

On the malaise of collapsed buildings in the country he noted that the building code which was designed in 2006 was not adhered to by the relevant stakeholders. “It has everything to guarantee safe building of construction so that nothing goes wrong. But the enforcement is lacking. The various town planning control are understaffed,” the Minister stated.

He attributed the high cost of building in Nigeria to poor technological know-how and the lack of encouragement for local industries to produce materials. He noted that virtually all the components in the building of material today are imported. He stressed that research institutes have come up with alternatives like brick from earth; it has not caught on with the taste of Nigerians.

Bolaji Abdullahi on his part advised that the Nigeria tertiary institutions should be configured to deal with current realities especially in technology and economic development.

Alhaji Tijani, in his own response frowned at the implementation of the subsidy on fertilizer, saying that it is worrisome that it does not get to the beneficiaries who are the small scale farmers.

Nonetheless, the Senate again broke its resolve to jettison the bow and go tradition when it simply asked three nominees Akinjide, Kuchi and Yuguda to simply bow and go.

Screening will continue on Tuesday next week.