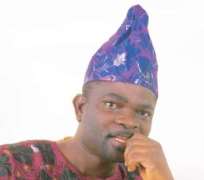 For Rotimi Makinde, life, as it is often said, has never been a bed of roses. At a time when most of his peers depended on their parents for their upkeep and enjoyed the relative warmth and comfort of their homes, he practically lived by his wits in the streets and sweated night and day in order to survive.

”Life as a youth was very challenging. My father had many wives. He was a policeman. Later, he retired and ran a quarry. I never lived with him. I was my mother's only child. So when both of them died, I had no one to take care of me. I had to fend for myself. But I was determined to succeed in life. I went through hell to make ends meet. At a stage in my life, I had to make a living as a taxi driver in order to pay my school fees,” he says.

Makinde attended Federal Polytechnic, Offa, where he obtained a National Diploma in Accounting. And then, unable to resist the urge to carve a niche for himself in drama, which was his first love, he moved on to the Obafemi Awolowo University, Ile-Ife to study Theatre Arts. Today he is a well-known figure in Nollywood, with a bias for Yoruba films. But his forte extends beyond acting to scriptwriting and filmmaking. Smiling and almost thumping his chest with pride, he said, ”I have been in the movies since 1991. I produced my first film in 1994”.

That film was titled Ohun Enia (voice of the people). According to him, it was the first step towards fulfilling one of his greatest wishes in life, which was to pass philosophical messages about life to his audience, using film as a medium.

Makinde claims that the late comedian, Gbenga Adeboye inspired him to produce films. Yet, to a large extent, his interest in acting was nurtured by the late Dr. Ishola Ogunsola. ”I was lucky to have lived with Dr. Ishola Ogunsola when I was growing up. He was a tenant in my father's house in Ile-Ife. He was well known for his philosophical writings and he was also a very talented artiste. I had always wanted to be like him. Unfortunately, by the time I produced my first film, he was already dead,” he says in a tone that seems to suggest that late Ogunsola was his role model and that he had actually planned to present the film as a surprise gift to him.

So far, Makinde has produced no fewer than seven Yoruba home-videos. He insists that each of them is a product of a burning desire to impact positively on the Nigerian society. “I am not a commercial artiste. I am not in the industry to make money,” he declares. ”You see, the film industry is, for me, an avenue to showcase my talent and sell to my audience what I believe in. That is why you can't see me appear in just any film.”

As unbelievable as it sounds, Makinde may not be involved in the Nigerian film industry for the money, after all. This is because he has divergent interests. Little wonder he comes across to his fans and admirers as a man with the Midas touch. Having worked for many years with a notable multinational firm with high stakes in the oil industry, he decided to go into politics and actually vied for a seat in the Federal House of Representatives in 2007, with near disastrous consequences.

He says, ”I only want to be in the position to contribute to the development of this society”. Even that innocent wish to help initiate positive changes in his society appears to have been laid to rest by an unpleasant experience that almost cost him his life.

He recounts how on April 15, 2007, at about 11.00 am, four hefty men invaded his home in Ile-Ife and abducted him. ”They blindfolded me and kept me in solitary confinement for five days. One night, I guess they had decided to eliminate me, they were taking me away to another destination when they were challenged by some vigilante men. I saw my chance and seized it. I began to shout to draw the attention of the men. My captors had no choice but to abandon me and run away. That was how I escaped death,” he says.

He regrets his loss at the polls in that year and blames it on the local election tribunal, which he claims was compromised by his opponents in the rival People's Democratic Party: ”I was the first victim of a compromised tribunal in Osun State,” he says.

Aside Nollywood and politics, Makinde's other interest is the hospitality industry. Recently, he opened a new three-star hotel in Alagbole, a community on the fringe of the boundary between Lagos and Ogun States. Known as the Capricornia Hotel, the place currently serves as a headquarters of sorts for him, where he consorts with fellow politicians, as well as his colleagues in the film industry. He says it is his contribution to the improvement of the Nigerian society. ”I see myself as a very creative person. I don't want to be identified with anything illegal in my life. The three things that I am involved in, entertainment, politics and hospitality, are interwoven. One thing that binds them, as far as I am concerned, is creative imagination. If you are creative, you will be able to create wealth. The reason why I ventured into the hospitality industry is to create wealth and to banish poverty from around me,” he says.

Hardworking and focused, Makinde considers himself one of the luckiest actors in the Nigerian movie industry. Why? ”I have a responsible and beautiful wife. She has all it takes to keep me at home and away from temptation,” he says.