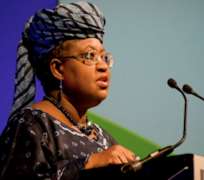 President Goodluck Jonathan forwarded the name of Dr. Mrs. Ngozi Okonjo-Iweala for approval and withdrew the name of Arch. Tonye Cole (Rivers State) as nominee. Okonjo-Iweala is coming on the ticket of the South East.

The President did not give a reason for withdrawing the name of Cole, who is one of the owners of Sahara Energy and son of Ambassador Patrick Dele-Cole.

The Senate however suspended further screening of the nominees till Wednesday.

President of the Senate, David Mark, acknowledged his observation, but told him that a communication from him to the executive on the matter has effectively taken care of his observation.