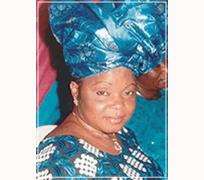 
According to sources, the hoodlums broke into her apartment at about 10:45am and carted away jewelries, unspecified sum of money and other valuables.

During the raid, which lasted several hours, residents of the town were thrown into confusion and shock, as they could not be helped by any security operatives.

We learnt the robbers didn't hurt her but only took away her valuables.