WOULD YOU HAVE A BREAST JOB WHILE WIDE AWAKE? 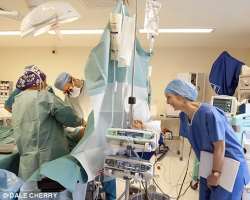 On the operating table lies a pretty blonde-haired woman with her eyes closed. A large blue fabric drape separates her head from her body and her breasts are exposed.

Each has a small incision along the base as though a fine red line has been drawn on with a felt-tip pen. The surgeon begins his work, carefully pushing a large, jelly-like implant into each breast. The girl's eyes open, she smiles up at me and says: 'Does my hair look OK?'
Is this a surreal nightmare? No. Welcome to the future of surgery.

Consultant plastic, reconstructive and aesthetic surgeon Fazel Fatah, and his fellow consultant Hiroshi Nishikawa, have honed a new operating technique at the Westbourne Clinic in Birmingham, where they perform elective cosmetic surgery using a combination of local anaesthetic and sedation. The patient is conscious, but woozy, and feels no pain. Most extraordinarily, they are able to hold a conversation throughout and can go home an hour after surgery - hence the procedure being dubbed 'the lunchtime boob job'.

'A general anaesthetic involves a combination of drugs to induce a state of complete unconsciousness, but this carries certain risks,' says Fatah.

'The drugs work by blocking nerve signals from the brain to the body. This means no pain can be felt, but as the muscles are paralyzed patients can breathe only with the help of a machine, via a tube pushed down the throat. This can cause bruising, cuts to the lips and tongue and, in rare cases, tooth damage.'

General anaesthetic side effects include nausea and vomiting after surgery in 30 per cent of cases. This usually happens straight away but some may feel sick for up to a day.

Fatah has performed abdominoplasty (tummy tucks), liposuction, fat grafting (where the patient's fat is removed by liposuction and then grafted on to the breasts) and even facelifts, using this technique.

'To my knowledge, no one else routinely performs this kind of surgery,' Fatah says. He suggests that general anesthetic is still used in many operations only because of tradition and lack of training.

'When breast augmentations first came in, we didn't have such sophisticated local-anesthetic techniques and drugs. Now we do, there is no reason why we can't perform many more operations under local.'

They perform the same health checks as they would for an operation under a general anesthetic, with a pre-operation assessment.
'Patient care is crucial and preparation is the same high standard as under a general,' says Fatah.

I was invited to watch office worker Nuala McEwan, 31, have a breast augmentation, a procedure that 10,000 British women undergo each year, with numbers rising.

Nuala says: 'With a 34C bust, I wasn't under-endowed, but I wanted them to look fuller. I had looked into having a breast enhancement but had been put off by the idea of a general anesthetic. I was unhappy about my bust, but I wasn't prepared to risk my life changing it.

'When I heard that surgeons could perform the operation with a local anesthetic, not dissimilar to one used by a dentist, I knew it was what I had been looking for.'

On the day of her operation, Nuala arrives at 8am. She changes for surgery into a backless fabric gown.
'I thought I'd be nervous, but I feel quite relaxed,' she says.

In the operating theatre a cannula (fine tube) is inserted into Nuala's hand and the initial sedation is administered intravenously. This relaxes the patient and means she remembers little or nothing about events after the operation. Propofol and Remifenanil - two drugs that have analgesic (painkilling) and sedative qualities - are used. They leave the body within half an hour of the operation finishing.

Local anesthetic, which cuts off nerve signals only to the area in which the drug is administered, is injected into the breasts. This is carried out after sedation so the patient does not feel a thing. Her arms are strapped down so she can't move them and interrupt the surgeon.
'I feel as though I've had one too many glasses of cava,' says Nuala after a few minutes, looking drowsy with her face partially obscured by an oxygen mask.

Fatah administers local an anesthetic to her breasts. A thick implement - the size of a knitting needle - is jabbed repeatedly into each breast. It looks brutal, but it's controlled trauma in the hands of a highly trained expert and Nuala seems unconcerned.

The breast consists of skin, tissue and fat, which lie on top of muscle. In a breast augmentation, a cavity is created between the muscle and breast and the implant inserted.

A diathermy (heated) needle is used to make the 2in incisions into each breast. This cuts through fat and simultaneously seals blood vessels to minimize bleeding.

On the other side of the screen, Nuala is still cheery. A couple of minutes later she complains of an itchy eyebrow and is more concerned about that than the events below her neck. One of the theatre nurses kindly scratches it for her.

Before the implants are inserted, the breasts are covered with a thin film of plastic so the implants don't touch any skin and remain sterile. Once positioned, Fatah sews up the incisions, using dissolving stitches that will disappear after a month, when the wound has healed.
Fatah anticipates elective surgery under local anesthetic will become increasingly popular, due to the fewer risks.

'It is the way forward for many procedures,' he says. 'Operations on the knee or other joints, nose jobs and even hernia repairs could be carried out under a local.'

The operation was on a Wednesday and Nuala's bandages were removed after a week, leaving her two cup sizes bigger.

'I don't know why anyone would have a general if it's possible to have a local. It all feels like a dream, but I've got amazing new breasts to prove that it wasn't.'