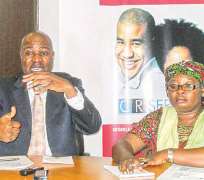 By MICHAEL EBOH
CR Services (Credit Bureau) recently held a media briefing on its achievement of full coverage of the banking industry and on its new product, Portfolio Monitoring. Pix shows (l)the Managing Director/Chief Executive of the Company, Mr. Taiwo Ayedun and the Chief Operating Officer, Mrs Edna Ishaya (r) at the briefing.

A financial expert, Mr. Opeyemi Agbaje, has lamented the instability in the country's financial sector, caused by the high frequency of reforms in the sector.

'There has scarcely been any period of stability in the Nigerian financial services industry since the introduction of SAP in 1986, instead the industry has been characterised by reforms, re-reforms, increases in minimum operating capital, reversals of reform among others,' said Agbaje, who is the Chief Executive Officer, Resources and Trust Company, RTC, Limited, in a paper titled, 'Banking Reforms and Financial Sector Evolution in Nigeria,' presented at the Lagos Business School Alumni Session.

According to him, the various reforms and policies have a major distraction to companies in the financial sector and the banks in particular, making it very difficult for the banks to focus on their core functions of financial intermediation.

Giving an overview of the various reforms, he said, 'The 1970s policy of indigenisation and nationalisation reversed the incipient globalisation of Nigerian financial services. On the other hand however, it secured greater participation in the industry for Nigerian citizens and institutions.

'SAP transformed the industry, positively in most respects. The main negatives however were serious poorer corporate governance and insider abuses.

'The fact that regulatory capacity had not been sufficiently upgraded (another negative) meant a constant cycle of boom and bust with costly consequences for the Treasury and depositors.

'Have the Banks had time to focus on their core function of financial intermediation since 2004? A period of stability, consolidation and entrenchment is required.'

He said that the the 2004-2005 banking consolidation accelerated the movement towards a size-based industry definition, rather than one based on strategy and intent,

He further added that it provided institutions with resources in excess of institutional capacity resulting in inevitable errors and abuses, and the CBN intervention of 2009.

He declared that the current reforms has negatively impacted the Nigerian economy, especially in the area of access to credit, financial deepening, unemployment, banking system contribution to the Gross Domestic Product among other.

He advised the regulatory authorities in the financial sector to consolidate on current reforms and allow a period of industry stability to allow participants settle to their core function of savings mobilisation and financial intermediation.

He also called on the authorities to focus on upgrading regulatory capacity to enable regulators prevent, detect and sanction institutional malfeasance rather than wholesale regulation.