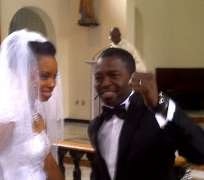 If you don't know who Kayode Peters is, it'll be best you claim not to have watched Nigerian television for the past 10 years. Remember 'Twilight Zone 'the University campus drama that revolved around the lives of a handful of students? Or better still 'Flat mates'the 30-minute sitcom that ran on AIT? Yes, the man behind both television series is Kayode Peters!

The actor/producer tied the knot with partner Alexander a graduate from the University of Lagos on Saturday, June 25, 2011 at the Church of Assumption, Falomo, Lagos. The wedding was attended by family, friends and well wishers.