IS RUBBING THE FACE AFTER DUA TRADITION OF THE PROPHET? 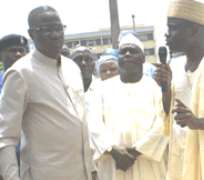 
The correct opinion is that it is Sunnah to wipe the face after dua. Saaib ibn Yazeed (Radhiallaahu anhum) narrates from his father [Radhiallaahu anhum] that Rasulullah (sallallaahu alayhi wasallam) would lift his hands whilst making du'aa and rub them on his face. (Abu Dawud vol.2 pg.106)

Hadhrat Umar [Radhiallaahu anhum] reports, 'When Rasulullah (sallallaahu alayhi wasallam) raised his hands for dua, he would not drop them until he wiped his face with them.' (Tirmidhi vol.5 pg.131).

Hafiz ibn Hajar (ra) writes after quoting the previous Hadith, 'Tirmidhi has narrated it and there are other Ahaadith which corroborate its meaning. From them is the Hadith of ibn Abbaas (Radhiallaahu anhum) mentioned in Abu Dawud. (Bulooghul maraam pg.498).

The Ahaadith put together demand the qualification of Hasan.

My son asked me, why you do loud recitation in three prayers, why not in all prayers? I said it is established from Sunnah. Is there any other logic or justification behind it?

At the time of Fajr, Maghrib and Isha, not much movement, noise and hustle and bustle takes place. The mind can concentrate on the recitation and the heart is clear of distractions. The effect of the recitation will touch the heart. As for Dhuhr and Asr, Qiraat (recitation) is done softly because had it been loud, the Musallees would not have been able to pay attention to the recitation, as there is a lot of noise, movement and distractions at that time. (al-Masaalih al-Aqliyyah vol.1 pg.65) and Allah Ta'ala Knows Best.

Mufti Ebrahim Desai
Accountability on the Day of Judgement
•Continued from last week
The Messenger described the questioning in a speech reported by Imam Muslim that the prophet Muhammad (S.A.W.) said: 'Allah (S.W.T.) will meet a person and ask him: 'O person, Wasn't I generous with you, and made you with a spouse, and made the horses and camels at your disposal?

Then Allah (S.W.T.) will meet a third person and will ask similar questions, and the person's reply will be: 'O Lord I believed in you, in your books, and in your messengers. I prayed, I fasted, and I gave charity. And he will praise Allah as much as he can. Allah (S.W.T.) will say: 'Hold on to your words, Now we will bring the witnesses.

The person will ask himself 'Who will testify against me?' Then that persons mouth will be sealed, and his thighs, flesh and bones will be asked to speak. They will speak about his bad deeds. He will know that he has no excuse. That is the hypocrite Allah (S.W.T.) will be furious with!'

Allah (S.W.T.) describes that situation in what could be translated as, 'On the day when their tongues, their hands, and their feet will bear witness against them as to their actions' surat An-Nur, (verse 24).

Also Allah (S.W.T.) says what could be translated as, 'And they will say to their skin:' Why did you bear witness against us? 'They will say 'Allah has caused us to speak, as He caused all things to speak.' (Surat Al-Fussillat, Verse 21)

Also Allah (S.W.T.) will ask us in the Day of Judgment about all of our covenants and promises that have made in our lives. Those promises may be made to Allah (S.W.T.) or made to people. And so Allah (S.W.T) says in what could be translated as, 'And fulfil (every) covenant. Verily! The covenant, will be questioned about. ' (Surat Al-Israa, Verse 34)

Allah (S.W.T.) will also ask us in the Day of Judgment about our hearing, our vision, and our hearts. He will ask us about how we utilized each of them. Allah (S.W.T) says in the Noble Qur'an, in what could be translated as, 'Verily! The hearing, and the sight, and the heart, of each of those, you will be questioned (by Allah) ' (Surat Al-Israa, Verse 36)

It is out of the Mercy of Allah (S.W.T.), that he told us about these important questions ahead of time so that we can prepare ourselves. The good believer is the one who prepares himself for those difficult events by getting closer to Allah (S.W.T), by doing good deeds, and by staying away from what Allah has forbidden, so that he will be among those who receive their book of deeds on the Day of Judgment in their right hand and Allah will enter them into paradise.

(Imam Mohamed Baianonie at the Islamic Center of Raleigh, NC, delivered this Friday speech on October 14, 1988).