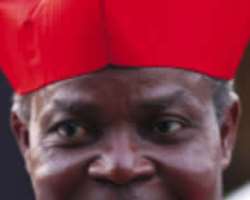 Pioneer Priest in-charge of the quasi-parish, Catholic Church of the Resurrection, Magodo GRA, Lagos, Reverend Father Michael Etekpo MSP, has urged the government to find a lasting solution to forestall further bomb blasts in the country.

Reacting to the recent Abuja bomb blast, the cleric asked President Goodluck Ebele Jonathan to apprehend the culprits and bring them to book.

Father Etekpo made the call while chatting with the reporter on the canonical visit of the Archbishop of the Archdiocese of Lagos, His Eminence, Anthony Cardinal Okogie to the parish from July 8 to 10.

He decried the insecurity of the nation, saying it was time the government rose to the challenge.

His words: 'The nation's police force is supposed to be a sign of security. As it is now, it means that nobody is safe anywhere. If a bomb can detonate inside the police headquarters, then it is not cheering news. We hope that the culprit or those behind the dastardly act will be brought to book. But from the news, we heard that Boko Haram sect has accepted responsibility that they were the people who masterminded it. We hope the government will be able to address the situation before it degenerates to something worse.

'From the report, human lives are involved. When human life is involved, it is a sad thing because life is precious and sacred to God. It means security is very porous and very bad. There is fear among the citizenry. Who is safe and where is safe? People are worried. People are anxious. We want to ask the government to please do all that is in their power to forestall further attacks so that Nigerians can be free to move around in their own country.

'Right now, we are still awaiting the President's cabinet. But while we congratulate him on his victory in the recent presidential elections, we urge him to take full responsibility in the nation. We know that Nigeria is a very complex society with multi-ethnicity, with different interests, different opinions, languages and so on. It is a pluralistic society, so it is not easy to rule a country as complex as Nigeria. But it is not impossible. All that he needs is to be focused, firm and take right decisions.

He should get people who will help him form right policies and implement them. Nigerians are expecting a lot from him, hoping that in these four years of his leadership, there would be quality of life and that they would reap the real dividends of democracy. We expect to have light and many roads. Even federal roads are in terrible situation. We need more functional hospitals where Nigerians can go for treatment. Now, Nigerians who can afford it go to India. That is very sad. We expect that our hospitals will work and not become mortuaries in the name of hospitals. We expect to see an improvement in the educational sector. We believe the president has all it takes to take the country out of its present state.'

Said he: 'Religious leaders, particularly at this very critical time, have the sole responsibility to pray for the country. Despite some crises here and there, it is because of prayers of the churches and Nigerians that the country witnessed relative peace. We have to continue to denounce all the vices such as corruption, the quest for power for selfish reasons, selfishness and greed.

'Leaders should condemn those vices that could divide us instead of uniting us. We must know that we must worship God. God is not a God of violence but of peace. He is not a God of death but a God of life. So, we cannot destroy lives in the name of God. That is not acceptable even with God.'

On Okogie's canonical three-day visit, Father Etekpo listed the expectations and plans of the church, saying that arrangements were in top gear.

'When a Bishop goes on a canonical visit, he goes to stay with the people,' explained the man of God. 'He goes to know what is happening in the parish or the quasi-parish in our own case. Archbishop Okogie is coming here to stay with us, to pray with us, to know us more and listen to us. Also, he is coming to encourage us and where necessarily, to challenge us. The events of the three-day visit will be woven around meetings with societies and to dedicate our Marian grotto. He will meet with different groups in the church. He will look at our records; the sacramental and the financial.'

Explaining one of the highlights of the event, Etekpo said the Marian grotto is part of the spiritual heritage of any church. It is a grotto dedicated to our Mother, Mary. In the Catholic Church, Mother Mary plays a very vital role. We recognize her as the mother of Christ and also the mother of the church. Many Catholic churches in the country and abroad always have the grotto so that the faithful can go there to pray, meditate and reflect. So, we are blessed here that we have built a Marian grotto in honour of Our Lady, Mother of Perpetual Help.

'As a church community, Catholic Church of the Resurrection is 22-years-old. But for the past 20 years, it has been an out-station under St Michael's, Ketu. It is just about 22 months that has been a quasi-parish, an autonomous or independent parish. The upcoming event is that from July 8 to 10, we are expecting a very important guest in our midst, the Archbishop of the Archdiocese of Lagos, His Eminence, Anthony Cardinal Okogie on his canonical visit. So, it is a very special event in the life of our church.

'In the past two years, there is a clear difference in all aspects of the church's life, spiritually, physically and structurally. The population has increased. Spiritual activities have increased. We have daily masses and two masses on Sundays. We have more devotions. More people are joining different groups and so on. As part of the Archbishop's coming too, about 200 candidates would receive the sacrament of confirmation.'

Responding to the question on the social corporate responsibilities of Catholic Church of the Resurrection, the priest said: 'The church is in one of the most organized and managed estates in Nigeria. Catholic Church of the Resurrection is particularly in the South East Zone because Magodo Estate is made up of different zones. The church is part and parcel of the meetings in the zone. Right now, we are planning to build the gate of the South East zone. For the visit of His Eminence, the South East zone has promised to put a banner welcoming the Archbishop. It means that there is a good rapport between us.'

He noted that Okogie's visitation just after his birthday was a blessing to them. 'The event would be a part of celebration, wishing him many more years of fruitful service, good health of body and mind and it will afford some of our members the opportunity of seeing him. Many of our members see him on television or very far away but he is going to be here in person. So, it is a great privilege that his visit is coming shortly after his birthday.

'His coming would be a big boost to the morale of our parishioners. It would be a great sign of encouragement and affirmation. We believe that following his coming, there would be a lot of further improvement in all aspects. Our dream, hope or desire is to become a full parish in the nearest future and our target is to have a befitting permanent church building, as the one we have now is a temporary one.'

Also speaking on the forthcoming event, Mr. Vincent Otiono, a lawyer, praised the quasi-parish for their commitment and dedication.

He said: 'Right from the beginning of its existence since August 2009, we adopted a slogan that Christ is in our parish and therefore, all of us the members are brothers and sister. To this end, our mission statement is that we are a Catholic family committed to the life of love and service to God and humanity for our well-being and salvation.'