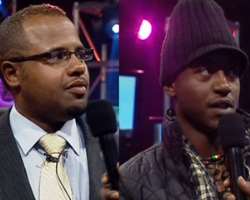 Last week five housemates were up for eviction but two of them were not that lucky as their luck ran out on the Sunday night live eviction show in South Africa.

Karen from Nigeria emerged the strongest of all those who were up for eviction with 31.65% out of six countries that included Angola, Mozambique, Ghana, Namibia and the Rest of Africa and of course her own country Nigeria voting for her.

Kim from Zambia followed with 25.11% taking the second position to bounce back to the Big Brother house out of those who were nominated last week.

It should also be noted at this time that Kim was among those who nominated Nic from Kenya who happens to be her boyfriend in the house and has also gone along way in helping her play the game. As it turned out, Nic was also evicted on the 19.June.2011.

Luclay from South Africa's days in the house are now numbered based on how he performed in the just concluded nominations and subsequent evictions. Luclay had two votes (His country South Africa and Botswana) which were the same votes that the housemates that eventually left the house had though his was slightly higher in terms of percentage.

Luclay is a problem to the viewers, to Big Brother and the housemates so any chance of handing him over to Africa could save him the house. This left us with Nic-Kenya and Danny from Ethiopia who emerged as housemates with the least votes and Kenya now is left with Millicent and Ethiopia has the arguably most beautiful housemates Hanni representing Ethiopia.