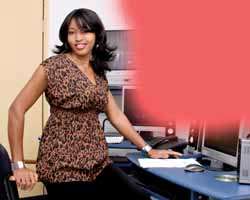 It is such a rarity seeing a young female director behind some of the movies and soaps we see on television, but Faith Stephen hopes to change that. Producer of Diamond Pictures Soap Opera TARIMA, showing on major stations in Africa, Faith is a typical example of women's empowerment in Nollywood, she is a producer, an editor, and an actress and a member of the Association of Movie Producers (Nigeria)

Working in technical as well as creative aspects of film making that typically is male dominated, Faith has been involved in production of movies and editing almost one hundred and seventy episodes of TARIMA... She has also been involved in the production of stories like, Blackmail, Crisis in Niger Delta, Homeless, Barren, Fugitive, which are powerful stories of social issues, intrigue, and real life drama. She is also playing the complex character Amaka on TARIMA. a hypocritical young lady, who sneaks around while pretending to be in church,. The English undergraduate of the University of Lagos, here, speaks more on her career, her love life, as well as fashion and style.

How did you get into the movie industry?
It is such a cliché to say it was by accident, I stumbled unto it while working in Diamond Pictures Limited as a Producer's Assistant, my management was impressed with my work and when an opportunity came for a producer I was chosen and I embraced it with both arms, the rest as they say is history.

I am impressed, knowing that you are multi talented, being a producer, editor and also an actress what are the challenges you have faced so far?

In this industry multi tasking is very challenging but I love what I am doing, and each time I hope I get better at it. Even though I have a flair for production being on both sides of the camera can create difficulty in coordination and inter facing, trying to juggle producing, acting, and editing, but it gives me an edge because I understand both sides.

What is the actual story behind TARIMA that you produce?

TARIMA is based on diverse storylines highlighting societal ills, it dives into issues such as inter tribal marriages, dual personalities, scams, blackmail, explores horrors inflicted on African womanhood by beliefs and customs. Watch an episode, you can laugh, cry, and be surprised all at the same time.

Tell us more about your character as Amaka
Amaka is a hypocritical young lady. She sneaks around while pretending to be in church. She became pregnant and was kicked out of her home, she had an abortion and moved in with Chief and his wife, causing havoc. Now she is on her own, she has moved up to bigger fish, Aristo! She is going places. Watch out! I love to play complex roles with redeeming qualities.

What inspires you in life?
Seeing the end result of whatever I do really inspires me to achieve my desired goals.

Who has your biggest influence in your career?
Two major influences, Firstly, The chairman of Diamond Pictures Limited for his female empowerment encouragement. Do you know that in TARIMA for example we have three young ladies in key technical positions, as Director, as Writer, and a Producer? Secondly, Amaka Igwe a real African woman that has broken all odds to take her rightful place in movie production, which is male dominated.

What do you think about the movie industry (Nollywood)?

I think with time it will improve in all ramifications, I believe some day it will get there.

You seem to be a very busy young lady how do you relax?

I relax by reading magazines and newspapers back to back, yes I admit it I read hints too (laughs), I love listening to music.

Do you believe in love?
Yes! Love is a wonderful thing.
Are you in love with anyone at the moment?
(Laughs shyly) My lips are sealed on that!
What is your perception of style?
It is a personal thing you create for yourself not what people dictate it to be, Character, Manners, Carriage, Modesty, and Confidence, it's more than what you wear.

What is your philosophy of life?
Trust in God!!
If you had a million dollar what would you do?
(Giggles) I would produce a Hollywood Blockbuster Movie in Nollywood!