To those who mock "Ghana Must Go" 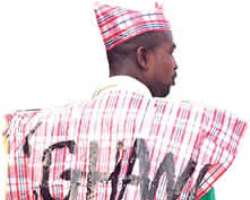 A couple of years ago one of the finest thinkers, Koranteng Ofusah-Amaah, in the African blogosphere provided us with a detailed exposé on “Ghana Must Go”. Koranteng's article was inspired by Marc Jacobs 2007 collection for Louise Vuitton. Louise Vuitton's use of the ubiquitous “Ghana Must Go” material for his rather expensive designer bags triggered a few soul searching comments mostly revolving around the supposed “theft” of an African pattern design by others.

“Ghana Must Go” again made waves at last week's (February 2010) New York Fashion Week. This time paraded on the catwalk as one of Gary Harvey's show stopping couture gowns billed for some bizarre reason as “re-purposed goods” (recycled material to you and I) alongside recycled iconic materials like the Levis 501s.

For those who may not know about the history behind “Ghana Must Go”, this is what Koranteng wrote:

“The “Ghana must go” designation resulted from the various expulsions of immigrants that Ghana and Nigeria engaged in between the 1960s and 1980s. Many were only able to pack their belongings in such bags before fleeing, expelled with barely hours or days notice. Thus Ghana must go is ironic at best, and has mocking overtones at worst. During the Rawlings Chain lean years (chain used here to denote clearly visible collar bones caused by hunger) in the 1980s when it wasn't simply a matter of returning immigrants and the whole country was facing political and economic difficulties (Revolution! Ghana), they were simply called “refugee bags”. We were all refugees then.

In any case, the trend in naming is clear, these utility bags designate immigrants, refugees, or those down on their luck. They are emblems of hardship and relative poverty. I'll argue here that they are object lessons about the fluidity of ideas.

The plaid pattern is thought to originate in the Taklamakan area in Xinjiang Uyghur in China perhaps between 100-700BC and certainly by the 3rd century. The Scots have the most famous claim to it however. The Falkirk tartan in 1707 is thought to be the Scottish debut of the tartan, the rich tradition of the Scottish plaid kilt that various families and clans adopted”

Louise Vuitton and Gary Harvey may be non-African but they are not the only designers to have used “Ghana Must Go”.

As Koranteng rightly points out “The Ghanaian artist Senam Okudzeto has very personal knowledge of the history of “Ghana must go” and has incorporated its iconography into her work. If you look at the fragments of her exhibitions, you'll be exposed to a history of dislocation, of fractured, sudden enforced exile. The question she raises is one of historical memory. Our plaid bags are the physical proof of the way in which the boundaries that meant nothing in our pre-colonial past now loom large in Africa. Indeed their name stems from the 1983 Expulsion Order giving illegal immigrants 14 days to leave Nigeria. But more broadly the bags refer to repeated upheavals in our lands and sub-Saharan Africa knows upheaval all too well. Still, there's a sort of existential defiance in her reclaiming these objects of loss. Divisions are embodied in the cheap, practical and functional bags. There is considerable wit in her work although it is always combined with a wistful displacement. Note the slogan, Capitalism and Schizophrenia, and some of the quotes she highlights: “deception is fundamental to the system”

A few months ago Nike found themselves in hot water when it received enormously bad publicity for using Ghana's Kente Cloth in its designs. The Kente Cloth patterns were developed in the 17th century AD and can be clearly traced to the Ashanti (Bonwire village) and to some extent the Ewe/Adangbe ethnic groups in Ghana. Kente which is largely produced in Ghana is more than a cloth. Its historical use was purely limited to sacred functions and it forms a strong artistic representation of the oral history, religious beliefs and social values of some Ghanaians.

“Ghana Must Go” on the other hand has no such claims to such historical symbolic significance.

As Koranteng stated “In any case, what claim does Ghana have to Ghana must go? Shouldn't the Nigerians, who ironically coined the term, have first cuts of any royalties? Heck these bags aren't even produced in Ghana, we are mere buyers and users. Our Chinese friends manufacture them using their native pattern. And, as we have seen, our local name for the bags is not widely known outside of West Africa. We're not the only refugees, immigrants or attendees of the school of hard knocks”

To Senam Okudzeto, Marc Jacobs, Gary Harvey and other designers/artists out there who are clever enough to have spotted the aesthetic values of “Ghana Must Go” kudos to you! If accusations of “creative theft” by non-Africans of so called African patterns lead us to appreciate what we mock and denigrate then long may the trend of “theft” continue!

Folks should keep an eye out for the colourful boots below. I'm sure we'll be seeing an awful lot more “GMGs”!